The wider masterplan, designed by BDP, includes projects by architects Allies & Morrison, Dixon Jones and Panter Hudspith. It is developed by the Westgate Oxford Alliance (a partnership formed by Land Securities and The Crown Estate).

The store has been designed with the specific architectural heritage of Oxford in mind. A careful study of the local area has resulted in this modern interpretation of the unique historic precedent set by buildings and townscape within the city. A robust brick facade is drawn back at various locations in a curtain-like fashion to reveal activity within the store and provide views out. The materials have been carefully selected to weather and improve over time just as the city-centre buildings have done for hundreds of years.

The store is joined by a brand new residential building. Clad in a warm red brick, this building will face west onto Castle Mill Stream while also forming a new street to the east opposite the proposed department store. These buildings will together create natural movement across the site together with enhanced public realm. Containing 59 apartments, many with views out to the stream, the design takes its inspiration from the modern tradition of College halls of residence, such as Arne Jacobsen’s St Catherine’s College.

“We’re very excited to receive planning approval for the John Lewis department store and residential buildings. The city has a fascinating and uniquely rich architectural lineage which we have enjoyed working within”. 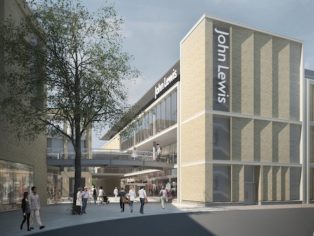