London’s grimy industrial past was the unlikely inspiration behind the £48 million Hilton London Bankside hotel, which conjures up an understated refinement from a palette of robust and exposed materials. Stephen Cousins reports.

Take a stroll along the riverfront at Bankside, in central London, and you’ll be greeted by a leafy pedestrianised boulevard, classy cultural attractions, and a plethora of shops, restaurants and cafes, all designed to draw in throngs of tourists that visit the area every day. It’s a world away from the dirty and noisy industrial environment that existed on the site some 80 years ago, when the area was characterised by large warehouses, factories, docks and wharves.

That rich industrial heritage may have all but gone, but it’s memory lives on, somewhat surprisingly, in the form of the 5 star, 292 bedroom, Hilton London Bankside hotel, designed by Dexter Moren Associates (DMA).

Hilton’s first hotel in central London since 2006, located just a few hundred metres south of Tate Modern, at the junction of Great Suffolk Street and Farnham Place, aims to combine the quality associated with a luxury brand with references to the site’s industrial past and its urban location.

The building’s facades are clad in a light-coloured brick, in keeping with the traditional local London stock, and a tough engineered bronze coloured aluminium. The same palette of exposed materials is employed in the interiors, designed by DMA in partnership with Twenty2Degrees Design, notably in the ‘Distillery Bar’, where reclaimed finishes, patina-effect metals and a barrel shaped, mirrored panel coffer, evoke the ‘spirit’ of the Stephenson & Harwood Distillery that occupied part of the site during the 1800s. The entrance to the bar features an impressive Penny Wall made up of penny coins dating back to the 1860s, referencing a large banknote processing warehouse that more recently occupied the site.

“There is a layering of meaning behind all aspects of the design, specific to the location and its heritage. This reflects the fact that hotel brands are moving away from being ‘cookie cutter’ experiences, where no matter where you stay in the world the hotel looks the same. The aim is to give guests the sense that they are in a different location when they wake up in the morning, which is good news for designers because it means we can be a bit more creative in our thinking.”

The Hilton London Bankside project dates back to 2008, when planning permission was submitted for three buildings, a budget hotel, an apartment hotel and a separate conference facility. The project went through several design iterations until the client, Synergy Hotels, saw the process of gentrification and investment overtaking Bankside and chose instead to build a large single building, centred around a 292-bed five star hotel, and including a range of high end facilities.

The hotel’s entrance is located on the main route of the “Design Trail’, a key pedestrian route linking Union Street, Great Suffolk Street and Holland Street, formed following the opening of Southwark Underground station, on the Jubilee Line, and Tate Modern.

“Ten years ago, people would not have dreamed of putting a five star hotel south of the Thames, it was the territory of the Travelodge or the Premier Inn,” said Moren. “Now it is becoming very lively, particularly around Shakespeare’s Globe Theatre, Tate Modern and Borough Market , there are lots of top class offices and very high class residential.”

The move wasn’t a step in the dark for DMA, which previously designed the five star Shangri-La hotel in the Shard by London Bridge, opened in 2014.

Opened in 2014. Hilton London Bankside is a 20,509m2 building (gross internal area) including a ground floor bar, the Distillery, the OXBO Bankside restaurant, an executive lounge, plus basement banqueting and event spaces. The latter accommodate a 570m² ballroom, eight meeting rooms, a boardroom and associated break-out and pre-function spaces. A leisure suite contains a 65m²gym and 17m-long swimming pool with changing facilities.

Planning limitations on the building’s height and rights of light, related to existing and proposed neighbouring buildings, led to the creation of two distinct building volumes, one low, one tall, linked by a volumetric glazed entrance and inner lightwells.

The external facades of the two blocks are built up in shifting layers, of London stock brick, glass and bronze coloured aluminium, intended to convey a sense of contemporary refinement and quality, while nodding towards industrial heritage and the local urban context.

The tallest block adjoins a neighbouring residential development and stands on a base layer of glazing, with bronze aluminium above, topped by a brickwork framework containing glass and bronze panels. The lower block features a glass internal layer, encased by a continuous limestone cloak. These two masses are bound by a delicate ribbon of glass that encircles the building at ground level, rising up between them to form the hotel entrance on Great Suffolk Street, and a dedicated Ballroom entrance on Bear Lane, to the rear.

Concerns that the bronze cladding might appear more shiny and ‘bling’ than industrially-inspired are unfounded, said Moren:

“The bronze is quite dull and light in colour and, if you look at the local context, our facades fit in naturally with the local materials, we just elevated them a bit by introducing the metal. One person called the building brutalist, which is completely inappropriate. We wanted to create a unified building that doesn’t fight with its neighbours.”

Cramming the numerous hotel functions and facilities into a tight site was a tough exercise in space optimization for DMA. The two blocks of hotel rooms are offset and connect at each end to form a rough doughnut shape with a light-filled atrium at the centre. The rooms in the middle cantilever out into the atrium to exploit the natural light, and the space extends down into the ground, creating space for a massive column free lower level basement conference centre and a ballroom on the floor above, able to accommodate 500 – 700 people.

“The ballroom has a balcony area and, much like the Grosvenor House Hotel, an undercroft extending off it, which theoretically makes it possible to fit 1,000 people in,” said Moren.

“The base of the atrium has a skylight, designed to bring natural light into the executive lounge, below, positioned just off the lobby.”

The ground floor hotel restaurant and bar will benefit from an ongoing project to pedestrianize the adjacent Price’s Street, creating a new tree-lined piazza. It’s one of several improvements being implemented by the Bankside Urban Forest initiative to maximise the quality of public realm and open space in SE1 by introducing as much greenery as possible. The developer of Hilton London Bankside, Splendid Hospitality Group, set aside funds from the project to improve the landscaping around the building, including the new trees and planting on Price’s Street, plus the installation of high quality yorkstone paving, cycle stands and a new lighting scheme along Great Suffolk Street and Bear Lane. Disabled access to the rear of the neighbouring grade II* listed Kirkaldy Testing Museum is also provided.

“Price’s Street is a little street that didn’t really lead anywhere, so it made logical sense to pedestrianize it and add some vegetation,” said Moran.

“The general public can access the bar and restaurant without having to book into the hotel, which should give the venues a life of their own.”

The move is typical of many new developments in London aiming to maximise income by incorporating multiple uses.

Hilton’s industrial/urban aesthetic finds inventive expression in the building interiors. In the OXBO restaurant, exposed metal screens, bare brickwork and reprocessed tube station tiles, are juxtaposed with rich fabric furnishings inspired by William Morris and a colour scheme of green, mustard yellows and browns, to create a relaxing, yet stimulating dining experience. In the lobby an artwork inspired by reinforced concrete is positioned behind the reception desk. And, in a lighthearted touch, artwork in the hotel guestrooms makes reference to a cheeky urban fox, whose footprints were found in screeds during construction. It is touches like this that prove that a five star hotel can retain its high end aspirations whilst acknowledging the less refined and more immediate character of the local context. 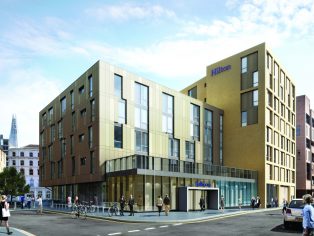 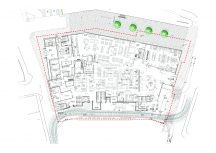