The new brick-clad facility designed by Herzog & de Meuron will replace the club’s existing ground Stamford Bridge which will be demolished.

The new stadium is expected to cost £500m and will have a capacity of 60,000 seats compared to the current 41,663-seater in Fulham Road. The redevelopment will include decking platforms built over the District Line to the north west and over the Southern rail line to the east. A new pedestrian access from Fulham Road will also be created.

Mayor of London Sadiq Khan now has 14 days to call in the plans or grant final approval to the scheme.

“Chelsea’s new stadium will deliver some real benefits to the borough. But we have also made it clear to the club that we fully expect them to work with local residents to minimise the disruption of the works.”

Chelsea said in a statement:

“We are grateful that planning permission was granted for the redevelopment of our historic home. The committee decision does not mean that work can begin on site. This is just the latest step, although a significant one, that we have to take before we can commence work, including obtaining various other permissions.”

H&F council has secured £22m in benefits to the local community through the project, including £3.75m contribution to build affordable homes for local residents in addition to already promised improvements of recreation facilities in the borough.

Plans for the new Stamford Bridge were first submitted in November 2015 prompting Jacques Herzog to describe the project as “very important”, adding:

“Pierre and I have always admired traditional English stadiums because of their specific atmosphere and history. Stamford Bridge has a rich history and is located at the core of a vibrant neighbourhood. Unlike an isolated stadium, it is part of the day to day life of the local community.” 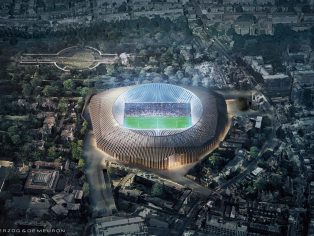