he relaunching of Trieste Airport

The relaunching of Trieste Airport is continuing through a working partnership with Lombardini22 and, in particular, with FUD, the Lombardini22 brand specialising in physical branding and communication design, which previously designed the airport’s coordinated visual communication system, including the departures area and the name change from Ronchi dei Legionari Airport to Trieste Airport.

Trieste Airport’s intermodal platform opened to the public thirteen months after the first stone was laid. The new transport hub for the Friuli Venezia Giulia region is a combination of a totally redeveloped airport, a railway station, a coach/bus station, a new multi-storey car park and a ground-level car park; there is also an internal road network with both public and private roadways and a pedestrian link between the airport and other facilities featuring an overhead walkway covering a total length of 425 metres that can be reached by lifts, escalators, fire escapes and moving walkways designed by Lombardini22 to make walking around easier.

The steel and glass pedestrian walkway running right across the intermodal hub from the airport was jointly developed by Lombardini22/FUD. Based on a careful study of the location and its distinctive identity, the pattern of colours directly inspired by the surroundings replicates the layout of the farmlands around the infrastructure. The rhythmic pattern of solids and spaces, sky and ground, dictates the facade’s colours and materials. Lombardini22 designed the walkway around a modular feature based on Trieste Airport’s iconic symbol. It has been manipulated and extruded to create a modulus forming a new compositional feature helping inject dynamism into the facade.

A striking new and easily identifiable entrance was opened at the same time as the walkway. The ongoing working partnership with FUD meant there was consistency and continuity in the work carried out on its coordinated image and interiors, both in terms of style and purposes. The colour blue, an authentic chromatic leitmotif in the image of the airport and its interiors, is the main means of attracting and welcoming passengers and everybody else using or working in the facility.

Important modernisation work on the airport has also involved the interiors: from the waiting areas and restaurants to the departures area, boarding gates and arrivals area. Focused on simplifying the passenger experience through a clear and immediate universal language, FUD’s project guides and informs through effective, intuitive communication that is also pleasant and ‘edgy’. 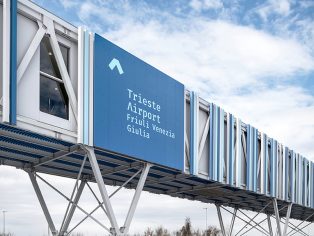