Exploring the London Festival of Architecture 2018 theme of ‘Identity’, Hawkins\Brown’s ‘A Space for All’ is the winning design that will take to the streets – thanks to sponsorship from Sir Robert McAlpine – to represent architecture and LGBT+ architects at the Pride in London parade on Saturday 7 July 2018 and beyond.

Selected from a shortlist of nine, the design for “A Space for All” plays on the stereotypical image of a house and appears as a simple pitched roof structure created using brightly painted scaffold poles. Fun graphics accompanied by loud music will set the scene for a party atmosphere aboard the float. Throughout the course of the parade, architects on the float will be drawing on a series of transparent screens forming part of the float structure, and will be joined by paraders around the float carrying positive messages printed on placards, and percussionists accentuating the lively beat of music.

Following the Pride in London parade on 7 July the float will be taken apart, with its bespoke signage and graphics auctioned off to raise money and awareness of LGBT+ causes within the profession. The brightly coloured scaffold poles will be re-used on construction sites for future buildings, creating a legacy that will be visible around the city for years to come.

The competition is an important element in the London Festival of Architecture 2018 programme as the festival explores ‘identity’. The London Festival of Architecture is committed to promoting equality and diversity in the architecture and wider built environment professions, and in 2016 supported the launch of Architecture LGBT+ with a Pride Breakfast at the RIBA – one of that year’s festival highlights. More recently, the LFA’s “See the Elephant” campaign was highly visible at MIPIM 2018, and has empowered individuals and organisations to stand up to discriminatory behavior in the built environment professions.

For us, the Architecture Pride float is a brilliant public demonstration of the London Festival of Architecture’s commitment to diversity and a celebration of the huge contribution made by LGBT+ architects in London – not only across the capital but around the world. Pride in London is a highlight of London’s summer calendar, and we cannot wait to bring architecture to the streets of London as part of such an amazing event.

“Hawkins\Brown’s design not only successfully celebrates LGBT+ Architects as part of this year’s Pride in London, but innovatively promotes acceptance and diversity by embedding the celebratory message that London’s built environment should be a space for all.”

The Hawkins\Brown “Space for All” float team says:

“We are so excited to have won the LFA Pride Float Competition. Our idea was to combine the dual identities of LGBT+ and being an architect, as well as making LGBT+ identity more pronounced in construction generally: We have used scaffolding poles decorated with designs from the LGBT+ community which we intend to return, still decorated, to working sites after use. We are particularly looking forward to the process of building the float and of course being part of Pride on the day.”

“We intend to lead by example on equality and diversity in order to inspire positive change across the industry. We are proud to support this competition by London Festival Architecture and Architecture LGBT+, and we applaud the designs that truly celebrate those inclusive values.”

Want more LFA?  Here are some events that aren’t over just yet!
With only 2 more days of #LFA2018 to go, the fun doesn’t need to stop here! Following a jam-packed four weeks, plenty of the fantastic events from this year’s festival are set to continue into the summer and beyond. So if you’ve not had enough of the festival just yet, don’t worry – we’ve compiled a snapshot of ongoing events for you here and you can head over to our website to browse through many more!

LFA Benches
City of London & outside London Bridge Station
These 9 new benches can be found across the City and outside London Bridge Station and are the result of the City Benches design competition organised by the LFA, the City of London Corporation and Cheapside Business Alliance. They showcase London’s brilliant emerging architects and designers, and are a public gift that help the City remain an exceptional place to live, work and visit.
– Here Lies Geoffrey Barkington by Patrick McEvoy
– City Benchmark by Elena Boni + Studioort
– Double Bench by Mills Turner
– Ceramic City Bench by Maria Gasparian
– The Garden Bench by Eleanor Dodman Architects
– A Bench for Everyone by McCloy + Muchemwa
– The Giant Causeway by Studio Yu with tomos.design
– City Ghosts by Mariya Lapteva
– Money Box by Nicholas Kirk Architects

G-tainer Installation
Until 6 July
Royal Exchange
This exciting venture is a collaboration between G-SMATT Europe, London Festival of Architecture, the Royal Exchange and other partners to display the latest technological innovations in ‘Smart Glass’ and ‘Digital Media Facades’ in an accessible and public forum. The  project consists of a G-Glass structure, displaying associated media content to coincide with other LFA activity around Bank Junction. This installation provides a focus point and will display specially designed video media across the surface. This will enable stakeholders to show promotional, artistic and engaging content to draw interest and communicate with those viewing externally.

The Bartlett Summer Show 2018
Until 7 July
The Bartlett School of Architecture
This year, almost 700 Bartlett students will exhibit at The Bartlett Summer Show! One of the biggest and most exciting exhibitions of student architecture in the world, the annual summer show attracts architects and artists, the creative and the curious, from around the globe. This year the show will be open to the public for two weeks and free of charge.

The Cass Summer Show
Until 7 July
The Cass, London Metropolitan University
This exhibition showcases the work of students from the Undergraduate Studios and Postgraduate Units at The Cass School of Art, Architecture and Design. The annual Summer Show features work from a range of disciplines, including Creative Writing, Fashion, Fine Art, Foundation, Furniture, Graphics, Illustration, Interiors, Jewellery, Photography , Textiles and Theatre.

Dulwich Pavilion: The Shortlist
Until 22 July
Dulwich Picture Gallery
Come and have your say on the six shortlisted designs for the 2019 Dulwich Pavilion. Models and visualisations of the proposed designs by young and emerging architects will be on display in the Gallery’s glass walkway and you will have the opportunity to vote for your favourite. The community vote will be combined with the judging panel’s votes to select the winning design. Architects will be tasked with exploring how the 2019 Pavilion might act as a welcome space to set the tone for visitors arriving at the Gallery.

Idencity: Six design proposals from the LSA to challenge the identity of London
Until 11 August
Roca London Gallery
Idencity brings together students from the London School of Architecture with architects from London’s leading practices, to create bold ideas addressing the UN Sustainable Development goals, and in the process change the identity of London. The proposals emerged after an intensive four-month period by the LSA’s Design Think Tanks, with ideas ranging from super-dense neighbourhoods of high-quality housing, to new forms of civic architecture that enable democratic decision-making.

The Pavilion
Until 29 September
Westfield Square
To celebrate the opening of Westfield London’s recent expansion, Westfield has commissioned The Pavilion – an event performance structure, which will live in the new Westfield Square. The Pavilion has been designed to create a community hub that will house a programme of music, arts and culture throughout the summer. The inspiration for The Pavilion stems back 110 years, to the 1908 Franco-British Exhibition in Shepherds Bush & White City. Architects IF_DO’s modern structure features a tall white roof that moves across the sky, forming ever changing shadows across the ground.

FACES of Spitalfields Traders Market
Until 30 September: 10.00am – 5.00pm
Spitalfields Traders Market
Sponsored by Spitalfields, London photographer Manos Fotiou has created a large-scale exhibition within the Market, to celebrate those who make the Market such a unique place. Featuring portraits of the traders, porters, security staff and management, alongside their brief and humorous bios, introduces the life stories they each  want to share with the world.Interact with the exhibition as you enjoy the market, and take pictures of the exhibits, sharing them on social media to receive a discount at the Market!

Serpentine Pavilion 2018 Designed by Frida Escobedo
Until 7 October
Serpentine Galleries
Architect Frida Escobedo, celebrated for dynamic projects that reactivate urban space, has been commissioned to design the Serpentine Pavilion 2018. Harnessing a subtle interplay of light, water and geometry, her atmospheric courtyard-based design draws on both the domestic architecture of Mexico and British materials and history, specifically the Prime Meridian line at London’s Royal Observatory in Greenwich. 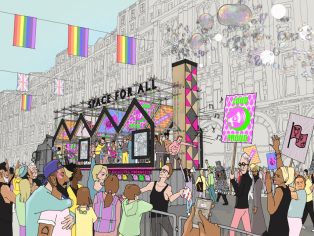 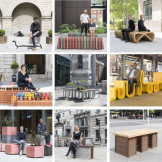 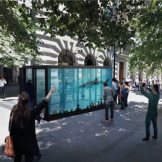 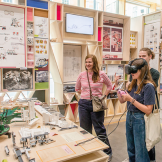 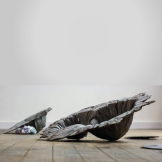 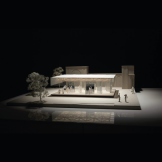 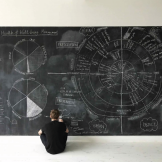 Idencity: Six design proposals from the LSA to challenge the identity of London 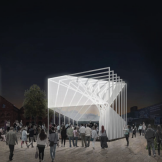 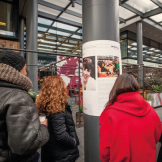 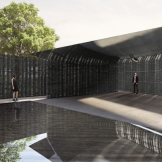