Hambleside Danelaw is delighted to announce it has won a Silver Green Apple Built Environment Award for its Stepsafe Low Carbon Insulator Rooflight. The national campaign aims to find Britain’s greenest companies, councils and communities. Through continued commitment to environmental awareness, Hambleside wins the award for the second year running.

Hambleside Danelaw, based in Daventry, has received the prestigious environmental award having competed against more than 500 other nominees. The award was presented to Ian Weakford, Sales Director, and Suzie Munday, Marketing Manager, at a ceremony at The Crystal, London, on June 30, 2014.

The award was for the Stepsafe Low Carbon Insulator Rooflight for its lower embodied energy and more significantly the ability to reduce the energy consumption for both lighting and heating of a building, and therefore improving the specifications of the Rooflight to meet the requirement of the Energy Performance Certificate (EPC).

“I am delighted to receive this, our 12th Green Apple Award since 2003, recognising our continued commitment to reducing our carbon footprint & producing environmentally friendly products.”

The Green Apple Awards began in 1994 and have become established as the country’s major recognition for environmental endeavour.  The awards are organised by The Green Organisation, an independent, non-political, non-activist, non-profit environment group dedicated to recognising and promoting environmental best practice.

If you would like to know more about Hambleside Danelaw’s product offering, or environmental policy, please contact us via email: sales(Replace this parenthesis with the @ sign)hambleside-danelaw.co.uk, or telephone: 01327 701 900. 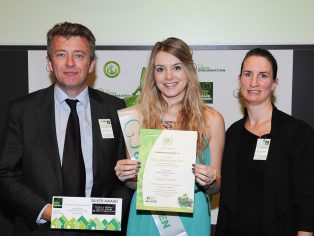