The food hall, representing the first phase of the Leicester Market regeneration masterplan, is due for completion in December 2013 and is constructed from steel, glass and timber with a zinc roof. This will provide a new home for the meat, fish and deli traders currently based in the indoor market hall.

Phase one will also include the provision of contemporary lock-up units in the south-east corner of the outdoor market – providing alternative accommodation for traders relocating from the indoor market – and some much-needed new public toilets.

Trading will continue in the old indoor market until the new food hall opens. It will then be demolished – in early 2014 – and replaced with the new market square.

“The form of the new food hall has taken influence from the scale and proportions of the Corn Exchange and the surrounding context. The adoption of the curved roof allows a clean geometry to connect a number of scales; the outdoor market with the proportions of the Corn Exchange, drawing the eye to the listed building, and the food hall which rises up in scale to address the new public square to the west.

“To achieve a flexible trading environment the curved beams allow clear spans with minimal interruptions from the columns on the trading floor. The use of glulaminated timber was preferred over steel for its modern, sustainable credentials; paired with the natural aesthetic which is more complementary of the functions within the market building.

“The scale and curvature of the roof makes the building more subservient to the grade II* listed building, softening its presence, yet distinguishing itself as a separate architectural entity.

“Large amounts of glazing have been incorporated to maximise the visibility of the Corn Exchange and the traders within the market, whilst strengthening visual connections between the new public realm, heritage assets and the outdoor market. The new building will be lightly connected to the city’s historic Corn Exchange by a glazed ‘divide’ which articulates the two forms.”

Proposals for the new food hall and overall master plan have been developed by Greig & Stephenson over the last 12 months on behalf of Leicester City Council and have been the subject of extensive consultation with market traders and other key stakeholders with the strong backing of City Mayor Peter Soulsby.

“The concept addresses the fact that the Corn Exchange has permanence within the ever changing market place, whilst the new food hall is adopting a lightness of touch, where it feels more like a visitor, inviting light and activity to define its image and atmosphere.”

The food hall represents the first phase of a £7 million major scheme that will not only transform Leicester’s 700-year old market for the people who work and shop there, but will also ensure that the market becomes a must-see attraction for visitors to the city.

By investing in the market, the city council hopes to encourage the regeneration of the wider area, attracting investors and developers to transform the shops and buildings in the adjoining streets. 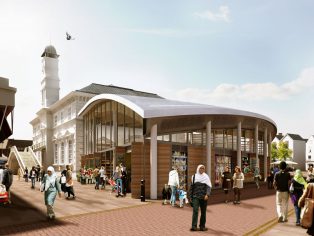