Crosslane Student Developments, part of the Crosslane Group, is pleased to announce that it has secured planning permission from Sheffield City Council for the redevelopment of a site on Scotland Street, Sheffield into a 437 bed, new build, premium student accommodation property.

The total development value is expected to be approximately £32 million.

The site will be developed into a modern, prime student accommodation development comprising three new residential blocks of six, seven and eight storeys, each with a green “living” roof. The high specification brick and glass development will have 144 studios and 293 en-suite cluster flats, along with a substantial common room, a private study room and meeting hubs, gym and a large landscaped internal courtyard. The development will be operated by Crosslane’s Prime Student Living, which provides management, marketing and letting services for student accommodation assets throughout the UK. The property is scheduled for practical completion in time for the 2017/18 academic year and works will commence in November 2015.

Crosslane Student Developments exchanged contracts in March this year with Bolsterstone Group Plc, a leading local property development and investment company, to acquire the site, known as Princess Works. The Princess Works site, on the corner of Shepherd Road, Allen Street and Scotland Street, was formerly used as a Brass Foundry which closed in 1972, and has been occupied by a number of short term, temporary occupiers since 2005.

Knight Frank Planning in Sheffield advised and acted for Crosslane Student Developments during the planning process. Knight Frank worked closely with Manchester’s DAY Architectural on plans for the site which sits in the St Vincent’s Quarter, a transition site earmarked for regeneration by Sheffield City Council, and amongst a variety of residential, office and small scale retail and warehousing businesses.

“We are pleased to have successfully received planning permission for Crosslane’s first student accommodation property in Sheffield, which is a prime and exciting top Russell Group university city and a lively and cosmopolitan city. The city centre site is a short walk to the University of Sheffield, which has over 26,000 students and a shortage of purpose-built student accommodation, and is also close to the university’s new engineering campus. Crosslane Student Developments continues to identify and evaluate potential opportunities to further grow our successful student accommodation business in the UK.”

“We are pleased to have had the opportunity to work with Crosslane Student Developments and Sheffield City Council to bring this exciting scheme to fruition. The project will act as a catalyst for the regeneration of this area as a whole.”

“We are pleased to have successfully advised Crosslane Student Developments from pre-application and through to achieving full planning consent whilst worked closely with Manchester’s DAY Architectural on plans for the site.

This development will contribute to the creation of a sustainable local community, securing a long term, viable use for the site. The increase in student population will benefit local businesses and contribute to regeneration of the St. Vincent’s Quarter. Residential developments like this are the cornerstones to regeneration and will in turn attract other retail and leisure uses.” 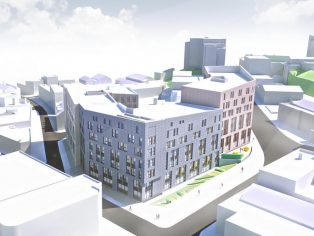