Award winning London architectural practice, gpad london ltd, is one of four to have its design chosen as a winning concept for the iconic Old Street roundabout redevelopment.

Islington Council and judges selected the final four, whittled down from an initial 120 entries, for being ‘iconic and achievable’ while creating ‘flexible and inclusive spaces’.

The proposed design from the gpad team is for a ‘Digital Garden’ providing respite from the adjacent traffic by way of a ‘forest of lights’ arranged around a leisure and event space. The existing digital display has been reformed into an interactive totem cycle store as the central feature to the landmark site.

“We’re ecstatic that our concept has been selected from such a high calibre longlist of entries. We’ve beaten tough competition, and some big household names, to reach the final which is a real achievement for our team and testament to everyone’s hard work. Old Street is also our stomping ground. We can almost see the roundabout from our office, so our design really comes from the heart.”

gpad has also been shortlisted in this year’s AJ Small Projects Awards for Charles Bettes’ tiny six by seven metre former garage site which he turned into a compact two-bedroom home in just ten months. The small site enabled Bettes to break into the fiercely competitive and expensive inner-city London housing market while still allowing him to live comfortably.

The winner of the prestigious AJ Small Projects Award will be announced on Wednesday 18 April 2018. 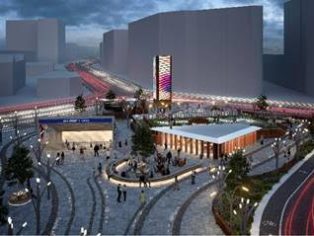