Glazing systems from Kawneer feature on an “architectural phenomenon”

Architectural aluminium systems by leading supplier Kawneer feature on what is believed to be Wales’ first twin-skin facade.

This architectural phenomenon** is complemented by AA®100 curtain walling on the main façade as well as the entrance atrium between two curved terracotta-clad elevations. Kawneer’s AA®3720 folding/sliding doors have also been incorporated to the rear of the atrium along with medium-duty swing and series 190 heavy-duty commercial entrance doors.

They were specified by regular Kawneer users Boyes Rees Architects for their framing options and sustainability credentials – being 100 per cent recyclable helped the £13.5 million project achieve a BREEAM “Excellent” rating.

“The Kawneer systems have been used on what we believe to be Wales’ first twin-skin façade, as internal partition, rooflights and curtain walling on all facades.

“The curtain walling is the main feature. The twin skin plays a key role allowing natural ventilation but acoustic protection from the nearby railway. We required recycled content to gain valuable BREEAM points.”

“Its impact was huge, it being one, if not the most important feature of the façade. With it being a business school, we wanted to create a corporate feel which the curtain wall does perfectly, giving a feel of iconic buildings in London. The glazing’s mirrored finish is stunning. It provides a slick glossy aesthetic to the elevations.”

The new 5,200m² school comprises two lecture theatres with 180 and 250 seats and a mix of teaching and trading rooms, student breakout space, café and offices as well as a roof garden on up to four storeys.

The Kawneer systems were installed on the concrete frame building on the site of a former car park over five months by Dudley’s Architectural Aluminium for main contractor ISG.

The twin-skin element is a principle extensively used in hotter climes to provide a climatic buffer zone within a glazed facade. The facade design allows ventilation by opening a window, without external noise intrusion, as well as night time purge ventilation (a natural cooling strategy using thermal mass) without the issues of security.

As well as the BREEAM “Excellent” rating of 76.62 per cent, which puts Cardiff Business School in the top 10 per cent of all UK non-domestic construction projects, the building was designed to achieve an EPC rating of 26 – a significant improvement over the notional new build minimum standard.

A world-class, full-service international business school with 260 staff and 2,700 students drawn from over 100 countries, Cardiff Business School turns over circa £25million per annum from its 1.4-acre site on the university’s Colum Road campus.

The new building enables it to reduce its reliance on its pre-experience MBA programme through the provision of new premium-fee Specialist Masters courses and Specialist MBAs and create a more diverse student mix through increased home/EU postgraduate taught student numbers.

This also further distinguishes the school from other regional providers of business education, strengthening the Cardiff University brand as being ‘the provider of high- quality research-led business and management education in Wales’.

The extensive use of large elements of glazing, as in the Kawneer curtain walling, was designed to maximise natural light and present a feeling of transparent openness to the building.

“The Kawneer product interfaced well with the rainscreen and the brickwork. We generally added feature flashings as a design feature that would also help with tying into other materials. There were a few tricky junctions but Dudley’s provided a great deal of help and expertise.”

“The building has been very well received by both the client and the students. It is always heart-warming to have a building go as planned and everyone has nothing but positive comments.” 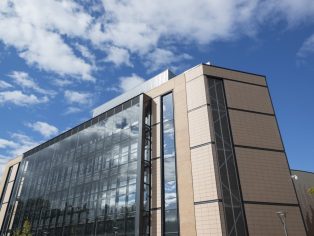