Glass and glazing specialist GLASSOLUTIONS has played a key role in the £9.5m project to upgrade the famous Waverley Steps which form the landmark link between Edinburgh station and the Scottish capital’s city centre.

Prior to the access improvement programme, “The Steps” were fully exposed to the elements and aesthetically unremarkable. Architects Jefferson Sheard were commissioned by Network Rail to design the new structure taking into account the Grade A listed status of the station and the fact that the steps stand at the heart of a world heritage site.

Their challenge was to balance the history and historic appeal of the station’s architecture with contemporary need and modern design. As well as providing lifts and escalators, their solution entailed extensive glazing in a self-supporting fully-glazed structure utilising advanced glass technology from GLASSOLUTIONS. The result is a ‘light-touch’ structure which doesn’t interrupt the surroundings whilst at the same time is striking in its own right.

For the screens, GLASSOLUTIONS had to meet the challenge of designing and producing glass panels which are triangulated and run down curved steel. Each 17.5mm glazed panel had to be individually scheduled by designer, Sharelle Thompson and each was rigorously checked by Sharelle and the team at GLASSOLUTIONS. White opaque film was applied to the glass at the base of the portal to conceal the steel work mass on which the screen was constructed.

In total the project, delivered by main contractor Morgan Sindall, took six months to complete with the glazing elements being completed by the GLASSOLUTIONS team in just three months.

“In design, location and structure, this project presented a range of challenges. It reflects our ability to deliver the kind of bespoke solutions which demanding sites require. The end result speaks for itself and is testimony to the quality of the GLASSOLUTIONS team at every level.” 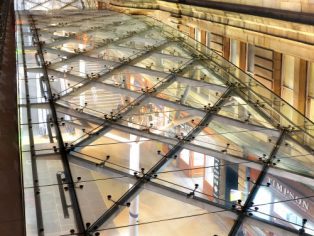