A historic arcade in Leicester which is one of the only examples of its kind in the UK has reopened following a £3m refit involving multiple glazing installations by GLASSOLUTIONS.

The Grade II listed Silver Arcade, which features 20 units, was built in 1891 and is believed to be one of only two four-storey arcades in the UK. Despite being an iconic Leicester building, it has been closed for more than 10 years and consequently fell into disrepair before a redevelopment project started in 2009.

“We are extremely pleased with the result of the Silver Arcade project. It’s a beautifully restored Grade II listed building that will enhance the character and appearance of Leicester’s Market Place and High Street Conservation Areas, as well as preserving, and in many ways enhancing, the architectural and historic importance of Silver Arcade.

“GLASSOLUTIONS played a key role in the successful project delivery, with the numerous glazing elements being crucial in achieving the desired aesthetics, safety and security. The refurbishment has given the building a new lease of life and guarantees its future for decades to come as a well-loved piece of Leicester’s City Centre and historic identity.”

Hot on the heels of winning in the ProCon Leicestershire Awards, Silver Arcade has now picked up a Forum for the Built Environment (FBE) award and it has attracted praise from across the region’s property and development sector. This includes Stuart Bailey, chairman of Leicester Civic Society, who described Silver Arcade as “a very fine, very clever building” and “significant nationally.”

With a choice of vacant units still available, Silver Arcade is currently being marketed by Lambert Smith Hampton with full details of availability on their website. 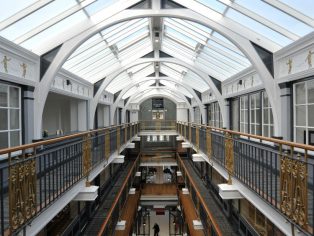