Glass of the future – a retrospective

It’s often interesting to reflect on the past to see where we thought technology and material advances would take us in the future. Some ideas were realised within 20 years and others still look to be dreams of the future.

Take the 1960s sci-fi futuristic imaginings – freed from technical constraints, authors’ imaginations ran riot and projected visions of our wants and desires. During a time inspired by the rapid and audacious achievements of the Space Age, it was only natural to speculate about what was coming next.

Recently, I stumbled across a series of 1960s advertisement illustrations by Charles Schridde for Motorola. The theme was ‘House of the Future’ with transparent structures and glass enclo- sures featuring prominently, typical of many other sci-fi futuristic musings of this era. This led me to wonder how far-fetched some of these ideas were.

It’s perhaps no coincidence that around this time the possibilities for glass on buildings advanced significantly through the revolu- tionary float glass process developed by Pilkington. This meant that large volumes of high-quality glass could be produced for the baby boomer generation. This innovation must have stimulated great inspiration for what the future might hold for glass technologies – but has there been a revolution on the same scale since?

There are two illustrations in the ‘House of the Future’ series which offer retrospective reference. The first shows a luxury apartment overlooking a city below, shown from the outside through large, curved glass panels of approximately 6 metres height and 3 metres width.

With today’s fabrication capabilities in large format and curved glazing, this vision of the future is now a reality. In fact, Schridde could have been more ambitious – some manufacturers can now fabricate curved panels up to 18 metres tall. Thanks to current interlayer technologies such as SentryGlas, the mullions could also be omitted with the glass spanning without additional supports.

Today’s interests in challenging transparent envelope geometries are inspired by advances in curved glass processing and progression in computational design. Doubly-curved panels can be manufactured with high optical quality, either using hot bending over moulds or the more recently developed cold bending that allows flat glass to be ‘pushed’ into shape and then mechanically restrained either by the interlayer during lamination, or clamping on site.

The other Schridde illustration shows a futuristic glass enclosure, possibly a lakeside outhouse, that evokes the green- houses of old, such as The Crystal Palace. As an enclosure, it has parallels to Apple 5th Avenue Cube in New York (2011), which Eckersley O’Callaghan engineered to utilise glass as both structure and facade.

I am drawn to the image’s depiction of shading. It acknowledges a human need for comfort but probably not the issue of energy consumption, there may have been less consideration for solar gain and its associated sustainability impact in the 1960s.

Since then, high performance coatings and other glass treatments, including solar control and low-e, have developed considerably, in part in response to ever stringent requirements in energy codes. The big challenge is how to overcome the contradiction of better light transmittance and reducing the solar gain. Today’s standard technology offers more reflective, darker glass than was envisaged but is catching up to make clearer views possible.

Looking to tomorrow, current developments in dynamic glass (which change in light transmittance and g-value) are promising innovations, especially for warmer climates. There are different approaches. For example, Merck liquid crystal modules and intelligent glass facades that are linked to the building management system could become more common as their costs reduce.

If Schridde were to produce a set of images today, what would our imaginings of the future be? I wonder how much today’s glass developments would feature?

Areas of inspiration could include high-strength, thin glass. It was originally developed in the 1960s for the automotive industry, without great success, but has been revitalised by the smart phone industry. It is yet to be fully utilised within architecture, but can be

useful where weight-saving is important. With rising sea levels around the world, will weight considerations become important for floating houses as they are for ships today? Corning’s latest incarnation of this fusion technology, Willow Glass, offers glass as thin as 0.1 mm, and could facilitate transparent, durable and light- weight fabrics for building envelopes in place of today’s traditional textile and plastic materials.

Although glass sizes have increased dramatically, they are still limited by transport logistics and local site constraints. More intelligent methods of joining panels present another frontier to be explored. Over the last 10 years we have realised increasingly transparent structural glass systems by incorporating fittings within the glass build-up. The holy grail is for all the connections to be transparent. Advances in transparent silicones and adhesives have potential, as does welding of glass seams together. Other transpar- ent materials like PMMA (acrylic) could come to prominence owing to the ability for large panels with invisible joints, although their use is currently hampered by fire resistance and limited solar gain performance.

In the same way that past authors readily offered their visions of the tomorrow, it is important that designers reflect and actively shape our future. We need to continue engaging with suppliers and specialists – we may discover that our wants and desires are close to fruition, or they may even ignite an idea with a manufacturer to make them possible. This dialogue is one of the ingredients which will help our industry to innovate. Who knows? In doing so, the future may not be so far away. 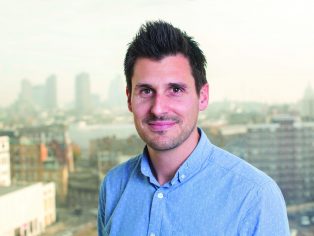