This new building will provide the school with high-quality facilities to inspire creative education and research in the visual disciplines of modern times. The building houses a series of large double height studios, lecture theatres and workshops, and is built over two basement storeys and five superstructure levels.

Arup worked with New York-based Steven Holl Architects and was appointed to provide a wide range of services on the project including structural, civil, geotechnical, mechanical, and electrical engineering; as well as lighting, facades, sustainability, acoustics, fire, energy, transport and venue consulting services.

“Building across from an architectural icon is a once in a lifetime opportunity. The client’s aspirations and Holl’s architectural vision required a holistic design approach involving a wide range of specialists working closely together. The finished building’s interior is a sculpture of concrete which works with natural light to provide great studio spaces interlinked with a winding stair. Dealing with these complex geometries provided a real challenge, bringing together a series of interdependent multidisciplinary considerations within the exposed structural form”

“From the outset was the desire to take a route up through the building as a hybrid between architectural promenade and atrium that promises an extraordinary spatial richness. The proportion of rooms, walls and materials are being crafted to bind the building together into a whole that is infused by an approach to environmental control and sustainability that emanates from the physique of the building… a design strategy that has been driven forward with a mixture of poetics and ruthless pragmatics: qualities that are singularly appropriate in this context, and developed with an artistry and skill”

Arup developed an effective low energy design for the spaces above ground; using the five metre diameter concrete ‘driven-void’ tubes within the central atrium space as ventilation chimneys to provide natural air and light, to improve students’ concentration and learning.

Arup also proposed and implemented an upgrade to the GSA’s district heating as part of the scheme, changing from the old inefficient boiler to a biomass system, which extensively lowered the carbon footprint of the campus including both the new Reid Building and the listed Mackintosh building. This compliments a range of sustainability measures including natural ventilation, Green roofs and gravity operated rainwater harvesting to deliver a BREEAM Excellent facility.

The Reid building opened for student use in January 2014 and is officially opened today, 9th April 2014. The building plays an integral part of GSA’s redevelopment strategy and brings together departments which were previously dispersed across the city, into an efficient and sustainable location. 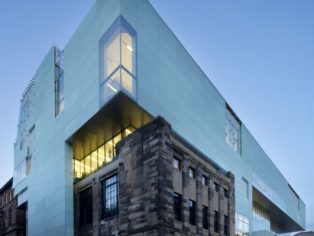