Give the greatest gift this Christmas: A roof over someone’s head

As the festive period and its inevitable tinsel-strewn excesses draw near, thoughts often turn to those less fortunate than us – a feeling reflected in widespread charitable campaigns. By highlighting homelessness at Christmas, these various campaigns are often in danger of perpetuating the idea that homeless provisions are less vital during the rest of the year.

CRASH, the construction and property industry’s charity for homeless people, is raising awareness of the fact that there is a desperate need to engage with rough sleepers throughout the year and not just through the severe Christmas weather.

This year alone the charity has helped over 7,000 vulnerable people throughout the UK get back on their feet and build a future.

68 projects across the UK, from Inverness to Newquay, benefitted from CRASH’s provision of pro bono professional expertise, donated and discounted materials and cash grants totalling £603, 631.

Although these figures are to be celebrated, there are legions of ‘hidden homeless’ not making use of year-round charitable services.

Providing easily accessible facilities for these vulnerable people, particularly during bleak winter conditions, is now more critical than ever. With this in mind, CRASH has launched their No Christmas Card Appeal 2014.

The premise for the appeal is simple: CRASH are asking companies to donate their full Christmas card budget. The money raised will then enable CRASH, through its unique relationship with its patrons, to construct and improve the buildings that give homeless men and women the opportunity to get off the streets and start rebuilding their lives.

In return for donations over £100 you’ll get a CRASH animated Christmas e-card with your company logo. If you donate £500 or more by 19th December, we’ll include your company’s name or logo in our special Thank You ads which we’ll be running in the industry media (construction & property) in the New Year.

“When you make a donation to CRASH, you are making an investment a person. You are reaching out to some of the most vulnerable men and women in our society and helping them to get back on their feet and rebuild their lives.”

“But your donations don’t stand alone. The companies that support CRASH add to your contributions the value of their donated professional expertise and their building materials. That really is a powerful formula for providing practical and sustainable support for people.”

Make a pledge to the CRASH 2014 No Christmas Card Appeal and sacrifice an impermanent Christmas card to make a permanent difference. 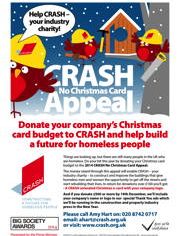