A beehive-inspired structure designed by Wolfgang Buttress opened to the public on 18 June in its new location at the Royal Botanic Gardens at Kew in London.

The 3D lattice steel structure called the Hive was the centrepiece of the UK Pavilion at the Milan Expo. The pavilion aims to highlight the decline of the world’s bee population and the importance of pollination to the production of food.

The Hive will remain at Kew for the next two years.

BDP’s landscape team, led by director James Millington, worked closely with Wolfgang Buttress, the artist responsible for The Hive, to create a sympathetic landscape setting for the installation that was accessible for all and takes visitors on an immersive journey through a colourful and vibrant wildflower meadow into the world of the honeybee.

A mix of wildflower planting has been used within the meadows to provide visitors with different experiences and a variety of different food sources of pollen and nectar for bees and other pollinators. A native mix of perennial wildflowers has been used for the outer areas of meadow offering a subtle colour palette of flowers. Closer to The Hive this is replaced with a mix of bright annual and perennial wildflowers, described by Tony Kirkham Head of Arboretum and Horticultural Services at Kew, as the ‘wildflower bling.’ 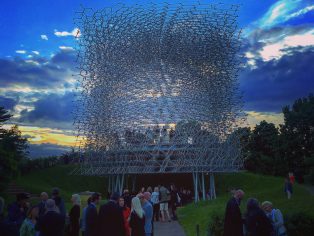 Photo courtesy of Stage One via BDP