Gatwick will hear this week if its visionary design for a world class two-runway airport has won a World Architecture Festival award, after it was shortlisted alongside some of the world’s most ambitious infrastructure projects.

Architect Sir Terry Farrell describes his design as a ‘new order’ for UK airports – one to compare with the best in the world. At the launch earlier this year, he said his practice’s Incheon Airport scheme in Seoul, which is widely seen as the world’s best airport, provided an example for how the Gatwick vision can be realised.

The new world class facilities at Gatwick will be built if the airport gets the green light to build a second runway – a decision expected in summer next year.

The shortlisted ‘Vision for Gatwick’ is based on Farrell’s fundamental belief in the importance of ‘integrated connectivity’ – a belief closely aligned with Gatwick’s vision of London being served by a network of airports, including two world class airports with two runways each competing vigorously – Gatwick and Heathrow.

Farrell’s plan shows how expansion of Gatwick would provide better balanced growth for London, the region and the UK. With the majority of traffic shared between London’s two major airports, the economic benefits would be more evenly distributed across London and the South East and have significant regenerative benefits in particular for South London, including Croydon and down to Brighton and the South Coast.

The airport design itself will be super-efficient and have an easy to navigate layout for passengers, providing ease of movement across the site and minimal changes of level. The entire airport will also use the latest technologies to ensure processes are seamless and non-intrusive for passengers. On the airfield, passengers will also benefit from even shorter taxiing times ensuring aircraft leave on time with fewer delays.

“Gatwick’s vision is of two world class airports in London helping to connect the country to the rest of the world. We want to see Gatwick grow and Heathrow improve.”

“A second runway at Gatwick would deliver greater competition amongst airports in London and the South East helping to drive down the costs of travel for all passengers, reduce the costs of exporting goods and services and improve service standards at all airports in the region. The design of an expanded Gatwick would be the envy of the world.”

“By providing a second runway at Gatwick we would create a much more balanced airports system that will positively affect the whole of the UK’s infrastructure. It is a really big idea which follows the way the world is going with ‘smart cities’ using digital technology to connect up systems and networks.”

“New York, Paris, Shanghai and Tokyo have either two or three major airports that enhance the power of their existing networks. A single hub airport may be the right answer for smaller cities like Frankfurt or Amsterdam, where most people transfer onto flights elsewhere, but when it comes to London it is invariably a final destination where people want to end up. A new runway at Heathrow would be the wrong choice and would focus too much on a single hub airport. The best answer for the UK is to expand Gatwick and develop a balanced network of airports.”

This year’s shortlist for the World Architecture Festival includes architects from over 40 countries. Gatwick is shortlisted in the Future Infrastructure Award category and is up against project including: 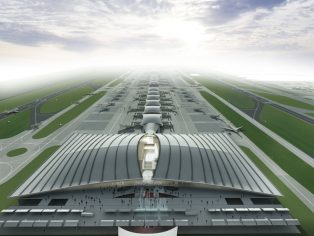