Building Dream Homes follows some of the nation’s architects leading the way in ground-breaking design, as they battle with builders, blueprints and the clients who hire them. Gartec were approached back in April to supply and install a home lift for a future-proofed upside-down house featured in the show, which was aired in June.

The progress of the new build home, commissioned and project managed by Marianne Cowpe from Westra Nook, near Cardiff was filmed for the first five shows in the series taking the project from planning, to digging the foundations to completing the structural build.

Unfortunately though, disaster struck in episode three as Marianne was rushed to hospital where she had to stay for two months, leaving James Stroud of Loyn & Co Architects to take over as Project Manager, with assistance from Marianne’s husband John.

The programme makers became aware that Marianne would be unable to walk when she returned from hospital so the installation of Gartec’s Home Lift (Artico 6000) was brought forward to allow Marianne to inspect the entire project when she returned from hospital. As a consequence, episode four featured Gartec for much of the programme, showing our engineers installing the lift and getting it ready for Marianne who arrived in a wheelchair, and was taken up in the lift to see the upper level of her new home.

The spacious Aritco 6000 lift was originally specified by Marianne and her husband as a way of future-proofing their home, giving them the ability to easily move heavy objects from floor to floor, and to add a desirable element of luxury to their home until the time came that they might rely upon it as the sole means to get ‘upstairs’. Who knew that time would come so soon? When Marianne entered the lift she asked about its capacity, and commented:

“What I’m worried about is, will it take all the wine!”

We can confirm Marianne will be good for up to 500kg!

Take a look at our Twitter timeline for more info about the project.

For further details about Gartec and our range of lifts and services, please call 01296 397100 or visit www.gartec.com 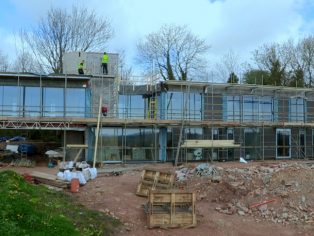 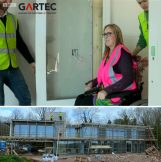