The Gallerie dell’Accademia at the foot of the famous Accademia Bridge host a vast collection of Venitian paintings from the 14th to the 18th century.

The museum complex had been built on the 14th century site of the church and convent (become later on Scuola Grande) of Santa Maria della Carita. In the course of time, buildings have been largely transformed in various occasions to adapt to the various required purposes. The last architectural refurbishment, begun in 2005, has been designed by architect Tobia Scarpa whose father Carlo had already planned a partial restoration in the 1940s. The project has brought out the opening of a new museum wing on the ground floor after the school Accademia delle Belle Arti had been transferred to another venue. Substantial and functional restoration works have been undergone including the installation of new technological facilities and the introduction of a new staircase. Several years have been required because the consolidation of walls and foundations ahs also proved to be necessary. The project has doubled the space available for exhibitions with a total surface of 12000 square metres dedicated to this activity compared to the original 6000 square metres.

Doors and windows had to satisfy precise aesthetic and technological requirements: limited visual impact, high thermal and acoustic performances, reduced maintenance and harmonious insertion in the architectural context. Doors and windows 0S2 in burnished brass have been chosen because they fit perfectly within the context and offer lengthy resistance to the harsh marine environment characterising the Venetian lagoon. The fire protection of the new interior staircase situated in the 19th century wing and planned as part of the redesign of the museum, was a major concern. The best technological solution has been adopted through the use of Secco AF category EW doors and windows based on the “fire engineering” concept and complying with the strictest regulations. The transformation of Grandi Gallerie dell’Accademia ahs come to an end and the new museum will be fully operational soon. 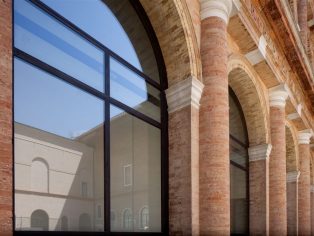