Beechcroft’s Special Projects team spent months on the careful renovation and conversion of the chapel to create four luxurious new homes which retain nearly all the original features, including stained glass and vaulted ceilings.

“Conventional radiators were quickly ruled out as a suitable heating solution due to the unique layout of the interior”, says Beechcroft commercial director, Ben Goss:

“Some of the ceilings are 12m high – all the heat would have disappeared straight up into the roof-space.”

The advantage of underfloor heating (UFH) in such instances is that, by filtering up through the floor, it warms the occupants of the room rather than the airspace.

In any case, says Ben, Beechcroft installs underfloor heating in virtually every one of its developments. “We’re very customer-driven and the market wants UFH. It frees up space inside the home, creates a comfortable environment and is very efficient.

In most new-build projects, underfloor heating is installed within a screed laid on top of a concrete floor. However, at Fitzroy Gate, Gaia installed its low-temperature hot water (LTHW) system between the original timber floor joists, with aluminium thermal plates from Autron Heating Products to distribute the heat evenly and reflect it upwards and into the room.

Grooved overlay was also used on the existing sub-floor at 25mm where the sub-floor could not be lifted.

The systems are supplied with hot water from gas-fired boilers and control is via Gaia’s WT-D digital thermostats. Unlike new-build applications, fitting a LTHW system in an existing building can be tricky, as Harriet explains: “The main challenge here was the irregularity of the levels and joist spacing. We overcame this by using different widths and adapting during installation. Access to the chapel was also limited as the main stairway was shut off to avoid damage to the original staircase. Gaia had to maximise the output of the system as the large ceiling voids increased the heat loss. We did this by increasing the flow rate and temperature.”

According to Ben Goss, Beechcroft installs Gaia’s UFH systems in approximately 80 per cent of its developments.

“We’ve worked in partnership for a long time now. It’s a good reliable system at a competitive price and we know the guys at Gaia provide a good service.” 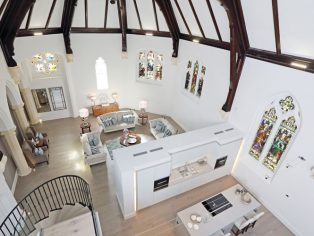