With BIM having brought 3D modelling even more to the fore as a standard design tool, architects are now exploring the possibilities of virtual reality to get a realistic idea of how their projects will perform and look. Teodora Lyubomirova reports.

Virtual reality (VR) is not a new concept, but the potential for its application in architecture has been advancing rapidly.

A host of advanced visualisation tools are now on the market with software engines enabling users to explore models with a much richer experience and level of detail. This has led digital consultancies to focus on showing architects how the technology can be usefully applied in ways far beyond the realm of entertainment.

Level 2 (collaborative 3D) BIM, introduced in April this year. The main principle of Level 2 BIM is the ability to exchange project data in formats that can be used by everyone involved, both in their own software and in a project’s federated model.

Collaboration has always been key for architects, but the new emphasis on collaboration runs across the whole supply chain. Now IT pioneers believe that VR is a key tool for ensuring the benefits of 3D modelling in BIM can be fully realised, whether for demonstrating how a building model will work in practice or for presenting the look and feel of a building in a vivid way.

A new era
Until relatively recently, translating drawings or 3D models into virtual reality was a fairly time-consuming process and involved advanced programming skills. Furthermore, showing a demo to a client for example would mean moving and setting up heavy hardware, adding further expenses and pressure to the workflow of professionals already pressed by tight deadlines.

New lightweight VR equipment not only eliminates the latter issue, but more importantly, when it comes to creating the virtual environment, new engines allow ‘drag and drop’ of BIM objects and models and make the transition from BIM to VR much simpler.

A virtual stroll across London
Design consultancy Wagstaffs, in partnership with daylighting consultant GIA and Vertex Modelling, has spent the past two years developing Vucity, which they claim is the first full 3D model of London. Jason Hawthorne, Wagstaffs managing director, gives credit to games development and in particular Pokemon GO, which is powered by the same Unity platform used in the London model.

“The reason why it is so successful is it’s one of the first applications that has taken VR and the real world and put them together.”

Officially piloted at this year’s MIPIM UK, Vucity is a rich tool for architects and masterplanners in which Wagstaffs has attempted to unify various aspects of the urban realm and make them available to architects who want to place their BIM model into the city landscape to test it. Because it is VR-ready, Vucity allows users to explore sites and foresee possible issues with the build before construction has commenced.

The company is also utilising a range of data from GIA, which can be overlaid onto the model. This features noise levels across larger areas including the HS2 site, as well as precise sunlight levels, connectivity and locations of construction cranes and protected views. Traffic analyses can also be translated into the model to demonstrate the real impact of new buildings on local infrastructure.

“The holistic view on Vucity is that it allows everyone to look at the model and better understand the impact of developments. This model of London allows us to look better at heights, at densities, and understand that proposed schemes are appropriate,” says Hawthorne. “This presents developers with an option to get to know the area better than ever before and ensure they’re building in the most suitable location.”

Hawthorne says the tool can be useful at planning meetings and consultations to demonstrate how projects will impact their surroundings.

“There’s transparency in the process,” he says, “and people can understand the buildings and how they sit in their context. Lots of those messages can be lost when you go to consultations.”

Kingston Upon Thames, Southwark and Barking and Dagenham are some of the boroughs that have already taken licences to use the model, and Westminster City Council is in the process of signing up. Developers using the software include Taylor Wimpey and Sellar.

Wagstaffs is currently tweaking the model to allow architects to insert their own BIM projects and explore them in VR, but another bigger challenge remains the model’s sheer scale. So far it spans 200 km2 of VR-ready London, from Hammersmith and Fulham in the west to Stratford and City Airport in the east, from Camden down to halfway through Southwark.

As Hawthorne explains, work has been concentrated on pockets of areas with “development aspirations,” and the model is expanding by 5-8 km2 a month. “At that rate we hope we’d reach the north and south circular roads by summer next year.”

Residential potential
Wagstaffs’ project was initially inspired by a sister service aimed at the residential market, VuitNow, designed to give potential buyers a cross-platform 3D VR-ready model of a property. Another similar service provided the springboard for launching a new digital consultancy with a VR bent into this growing market – Andrew Lucas Studios.

Business development manager Hamza Abbas says the firm launched in response to demand from architects and designers wanting to provide the service to clients, and has now struck deals with a number of consultancies including London-based SODA, Casson Conder Partnership and Attol Architecture. While Andrew Lucas Studios’ main goal remains perfecting its mobile app, the team is also focused on creating a bespoke VR-ready platform to enable architects to upload their existing 3D models and immerse users in the environment. “With renders and flythroughs you are looking at a screen but you are not really there,” explains Abbas.

“With VR, whether you are the architect or end client, you can step into an actual property before it has been built.” He adds that the positives from VR technology also extend into the design process itself: “Normally if you need to make changes once a 3D render has been made, you’d have to go back to the drawing board and re-do everything. The exciting thing about VR is you can change the design.”

VR limitations
While there is scope for amendments, these are mostly cosmetic – colours and textures – and major changes to the plans are still largely done externally. Ben Bennett, managing director of Luminous, a digital consultancy and surveying firm, comments:

“VR is a very powerful tool, it gives us a chance to envisage the real world and gives architects a chance to change things virtually.”

“But there are some caveats,” he explains. “You can make changes on the fly – but we’re not there yet with in terms of substantial changes to the geometry; it requires additional modelling.”

He insists even the cheapest visualisation tool can be ‘very effective’ in planning.

“We have worked with clients where we’ve actually taken 360º headsets and made planning officers sit down and see something in perspective. A 360º bubble view really communicates issues such as height – and that’s only the most basic way architects can integrate VR.”

At the other extreme, architects can use it more extensively as a design tool.

“It gives them a chance to explore whether something works or not,” says Bennett. “We have found that once they’re in the 3D environment it really shows where things don’t work.”

A future fusion of BIM and VR
Bennett, whose consultancy is engaged in one of the major regeneration projects in London’s Spitalfields with architect/developer specialists Architecton – is urging architects to explore the different engines and visualisation tools in order to build their in-house capacity – which could further streamline the design process by cutting out the middle man.

“I think this will become part and parcel of the design process. Architects will test things virtually and do everything in-house.”

He predicts VR will transform construction too, with professionals being able to overlay technical data directly on site and inspecting the changes virtually via ‘smart’ helmets. Bennett concludes:

“A lot of people have heard about VR, but they don’t know how to use it to get the benefit within their practice. I encourage architects to start looking at the technology now and learn about the tools there are.”

Beyond that, the industry will increasingly be able to harness AR (Augmented Reality), mixing reality with overlayed CGI, already a familiar tool in the media:

“I think we are scratching the surface at the moment, and it will bring big benefits.” 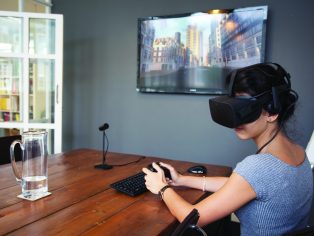