Airedale Academy in Castleford recently underwent significant refurbishment to repair its failing flat roofs, which had surpassed their natural life expectancy and were experiencing water ingress. Prior to the work commencing on site, flat roof manufacturer Bauder helped the academy successfully secure £1.5 million of funding for the required works by assisting them with all stages of the application process.

All of the original waterproofing on the school’s campus was then removed before being replaced with over 7,200m² of Bauder’s premium reinforced bitumen system, Bauder Total Roof System, by approved contractor FRS Roofing Services. The system build-up included Bauder’s PIR Insulation for superior thermal performance and tapered insulation to effectively create drainage falls without having to incorporate them into the structure. As part of the necessary works, 20 new Bauder rooflights were also expertly fitted to give essential daylight to the building’s interior.

A challenging element of this installation was the number of intricate detailing requirements, with the roof possessing over 20 separate roof areas, calling for exceptional levels of workmanship from FRS. There were also some health and safety implications, with asbestos having been found within the building structure. Consequently, specialists were called in to ensure safe removal and some roof areas were overlaid to minimise the possibility of any asbestos debris being dislodged and therefore contaminating the rooms and corridors below.

The academy remained open and fully operational throughout the works, which caused logistical challenges, however all deliveries were timed as not to conflict with vehicles moving in and out of the facility and the team worked closely with the client to agree working hours to reduce disruption to the students and staff.

“The expert support we received from Bauder was crucial in helping us secure the necessary funding and the final outcome of the roof refurbishment is outstanding. We are already starting to notice the benefits, including cost savings as a result of the insulation upgrades, and our long guarantee gives us total confidence about the future performance of our roofs.” 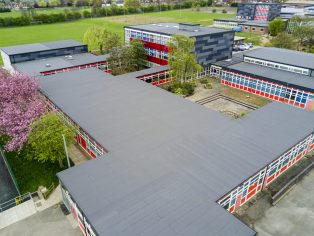