Leslie Jones Architecture is on-site delivering Friars Walk, which will form a major part of the ongoing transformation of Newport City Centre and the surrounding area, representing a £250 million investment into Newport. Brian Tracey, director of the firm, outlines the designs for the scheme.

As one of the fastest growing cities in Wales, Newport is undergoing a comprehensive programme of regen- eration, led by significant investment in the city from both the council and private investors. The overall aim of Newport’s 2020 vision is to create a programme of citywide regeneration schemes that will reinforce Newport as the pre-eminent commercial centre in South East Wales on a local, national and international scale.

Leslie Jones Architecture was employed by Queensberry Real Estate to design and deliver the masterplan for the city’s new retail and leisure offering due to its extensive experience in retail-led urban regeneration schemes, which includes Southside in Wandsworth and Eldon Square in Newcastle.

Friars Walk aims to bring retail back into the city centre providing modern retailing space alongside the more traditional city centre. It lies between the River Usk and Newport’s existing retail core and has therefore been purposefully designed to reconnect a disjointed part of the cityscape and create a cohesive, attractive and accessible urban realm.

Friars Walk will reshape the city landscape of Newport by creating a 390,000 sq ft centre with 35 retail units anchored by a three-level Debenhams department store, a Cineworld multiplex cinema and 13 restaurants. There will also be a new 350-space car park, bus station and interchange.

To ensure a smooth flow of footfall throughout the scheme and create a rational layout, Leslie Jones’ team of expert designers created an integrated network of covered streets. This also caters to Wales’ infamous weather by providing shelter to shoppers in an all-weather destination. Differences in street levels have been resolved by a new three-storey, 90,000 sq ft Debenhams to the north, which will encourage pedestrian activity. In addition, it has designed double-height shop fronts to meet the demands of today’s sophisticated retailers.

Leslie Jones took inspiration from the surrounding Welsh landscape and Newport’s historic architecture for the design, incorporating slate to the podium level supplied by Taylor Maxwell and 5,800 tons of steel for the frame. The retail and leisure blocks will be clad in a variety of textures and materials, including aluminium cladding and opaque glass panels supplied by Kingspan along with zinc vertical cladding supplied by Euroclad Vieozinc. Brickwork to street level facades and malls features the Hectic Black brick by Wienerberger and GRC supplied by GB Architectural. The malls are completed with a roof covering of ETFE roof by Novum.

The scheme, which will open in autumn 2015, is already 60 per cent let and has attracted high profile names to Newport such as New Look. Other retailers including Topshop and Next are also returning to the city, having abandoned it in a period of retail decline. Topshop will take a 21,000 sq ft unit, three times the size of its previous store, demonstrating the success of Friars Walk and the wider regeneration plans in Newport. All retailers will benefit from the growing catchment, which is set to almost double from 226,000 to 442,000 on completion of Friars Walk, bringing people back into the city centre.

The masterplan also includes a series of public spaces to create a new sense of place for the scheme. These will be laid out around the new Cineworld and riverside leisure core, which will feature new restaurant occupiers including Prezzo, Nandos, Cosmo, Frankie & Benny’s and Chiquito. These restaurants will also likely draw crowds from the nearby rugby and football stadium at Rodney Parade who will be able to access the operators via a new footbridge over the River Usk.

The resulting scheme will be both functional and aspirational, securing Friars Walk’s place at the heart of the ongoing regeneration of Newport and re-establishing its position as a regional retail centre. 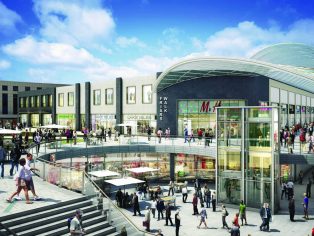