A CLT office building currently on site in Paris is set to become an emblem of timber construction in France, as the country’s largest building of its kind. Jess Unwin speaks to its architects about how modern engineered timber is gaining traction as a solution.

When the €15m Opalia office development is completed next spring it will become the largest timber building in Paris, but the team responsible for its design want it to stand tall for another reason.

The Opalia, located on a thin strip of land right next to the south-east section of the city’s inner ring road, the Boulevard Périphérique, will eventually comprise two storeys of below-ground car parking and then eight storeys above ground, rising to a height of 31 m.

Art&Build entered the competition to win the Opalia contract with the company’s very first wooden building design – and director Steven Ware believes that commitment to the use of wood, or cross-laminated timber (CLT) to be more accurate, helped sway the decision.

“What has often happened in the past is that wood is suggested for a building but is then abandoned in favour of concrete because of perceived higher costs. But I think wood won us the contract this time. Paris is more ecologically minded now, as are other cities like London. There’s rivalry between cities to move towards a low-carbon economy. So the competition jury liked that we proposed a timber building on a large scale because that’s the sort of project they want to see.”

Cross-laminated timber is really gaining ground as a construction material. Unlike glued laminated timber (GLT), also known as glulam, which is layers of wood glued together in the same direction, CLT consists of layers of timber fixed together at right angles to each other.

Austrian company KLH, which is supplying the CLT on this project, says that with structural capabilities akin to concrete in material strength, CLT can be used for all elements of a building’s superstructure – wall, floor and roof.

“the only truly renewable construction material, with the lowest energy consumption of any building material across its lifecycle.” The company adds: “Using cross-laminated timber will reduce CO2 because trees act as a carbon ‘sink’ removing CO2 from the atmosphere, releasing oxygen and sequestering (storing) carbon.”

At the Opalia site, a major design challenge is solar gain. To overcome this, an innovative double-skin facade is to be used all along the south-west side of the building. Steven Ware says:

“We knew this approach would provide solar protection – and acoustic protection too – but at the same time, something like this has never been done before on a wooden building, so we’ve had some hoops to jump through with the planning authorities.”

“A double-skin facade means traditional double-glazing then outside of that another single-glazed element, which creates a buffer zone. In that zone, if it’s designed properly, you can increase the thermal performance of your building by ventilating or not ventilating that zone. In this case what it mostly does is protect the solar protection system – in this case a venetian blind system – inside the buffer zone.”

All that glazing suggests the result would be something of a glass box, but Steven points out:

“The nice thing about the double-skin facade is that the outer layer of glazing doesn’t need the coloured or slightly mirrored treatment used to make it reflective, which results in maximum transparency and means you’re going to see the wooden cladding very clearly.”

The whole exterior of the building is clad in Douglas pine, sourced from the Morvan forest about two hours from Paris. There is no need for similar glazed protection to the rear of the building but the exposed timber cladding is treated for protection against the elements.

The noise and pollution produced by around 270,000 cars per day on the inner ring road was another design challenge for Art&Build to consider. Ware reveals:

“We wanted to create a gentle barrier, protecting the residential buildings north of our site by providing a screen between them and the noise and pollution. We also had to build something fairly high to achieve the gross floor area that the client wanted.

“We came up with the idea of a protective hand shape where each floorplan is a little bit different – rather like with a hand when you curl your fingers slightly and each finger curls in a different way. This hand closes the block off, creating a garden on the inside, yet you can still see through between the different levels and the backdrops. We put this forward as an architectural proposal before even talking about the wood.”

The different floorplans were one aspect of another major challenge for Art&Build: keeping costs down. Ware explains:

“When dealing with wood you’re talking about a lot of prefab elements and the more rectangular the better – but our floorplan is unusual. Our aim was to reduce the amount of offcuts so we worked with the timber contractor and moved the supporting beams where possible to address that.”

“One of the main barriers to building in wood is that people generally say it’ll be 30 per cent more expensive and we wanted to prove it wouldn’t be. With a few extra hours working on design and working with the contractor we’ve succeeded.”

While the load-bearing weight of the building is carried by a timber frame, and the cladding, walls and floors are timber, Steven believes that use of materials other than wood, making the most of their specific advantages, is another way to keep costs down.

“People generally accept that no building needs be 100 per cent wood. Besides the glazing, we have a steel ring beam round the edge of each floorplate to bind everything together. In wood it would have been a colossal size and more costly.”

Elsewhere, the building is all-concrete below ground and features a concrete lift core. As another measure to counter the transmission of traffic noise from both outside the facade and between floors, a raised and carpet-covered technical floor will be installed on every level.

While carpet will conceal the timber beneath office workers’ feet, around 60 per cent of the ceilings will be exposed CLT timber. Says Ware:

“We will use varnish with a little white paint in it to even over the finish because it is an industrial-grade timber that’s quite knotty and rough. The layer of varnish will protect it while giving a lighter and uniform look. The finish will also assist natural light levels.”

The building’s roofs are very definitely CLT, which brought another challenge with the three areas covered with plants. Contact between wood and substrate poses a rot problem, says Ware.

“We came up with a raised level, onto which the substrate and plants will sit and which is independent from the main structural element – and then you ventilate the gap between.”

Steven believes cities have taken time to wake up to the potential of modern engineered timber like CLT because its qualities haven’t been well known until recently. Test and studies worldwide have helped to erode traditional misgivings.

“Take protection against fire, for example. Most people now accept the concept of what’s called the sacrificial char layer, which means that after some burning the charred layer becomes a protective layer protecting the wood below – so the fire goes out.” Ware adds: “If timber does fail, firefighters, who after all are the ones who draw up fire regulations, understand how and when it will fail much better than steel and concrete. Of course, Paris is already 70 per cent wood behind the stone facade on the boulevard. The fire brigade is perfectly comfortable with engineered timber because there’s the reassurance of its controllable behaviour in fire.”

“great for headlines,” he believes modern timber structures are important for another reason.

“If there’s one urgent issue we have to deal with and which the construction sector can make a contribution to, it is getting more wood into the buildings because we need to reduce the carbon footprint of the industry, which is huge. The ease of concrete has put us to sleep, but when you look at how much energy is required to make it and then demolish at the end of its life it’s ridiculous not to look at wood.

“This is our first wooden building but we now have others in Nantes and in Bordeaux, and we’re also doing work on different ways to use CLT – research which we’re going to publish.”

In support of wood

“You still have to convince people because the biggest perceived barrier is cost but now companies like ours know how to tackle that. The answer is an overall cost strategy – not just what timber costs compared to steel. When you look at how much you’re spending on foundations for steel and concrete and how much your building will weigh you start to see figures that are in favour of wood.”

• All timber produced by KLH is certified by the Programme for the Endorsement of Forest Certification, which promotes sustainable forest management • The adhesive used in the cross-lamination process is completely solvent and formaldehyde free 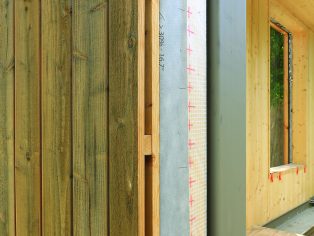