This is Frank Lloyd Wright by Ian Volner and Michael Kirkham and published by Laurence King in August 2016 brings the projects and persona of this world-famous architect into vivid focus through witty narrative and beautiful illustrations.

Frank Lloyd Wright wasn’t just an architect. He was a prophet, a poseur, a beloved teacher, a failed businessman. During his long, eventful life he experienced both incredible misfortune and great success.

This Is Frank Lloyd Wright is the first architectural title in Laurence King Publishing’s successful This is series, and will give readers an upclose look at Wright’s progress from difficult childhood, to struggling apprenticeship, to early success, through mid-life setbacks and on to late-life comeback.

Beautiful specially commissioned illustrations documenting the important events in his life sit alongside photographs of Wright’s most iconic buildings, including Fallingwater and New York’s Guggenheim Museum.

This is Frank Lloyd Wright will be available in August. 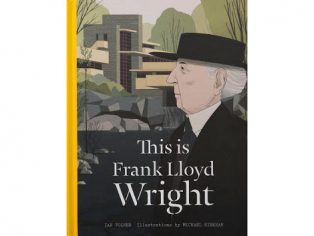