Work on a landmark office facility designed by Fosters + Partners has begun this week in Copenhagen, Denmark.

The 39,000 m² building will be the new headquarters of Ferring Pharamceuticals A/S  and is located on the Danish capital’s waterfront in Kastrup near the Copenhagen International Airport.

The triangular structure has a striking glass facade and six floors offering views across the city and as far as Malmö and the Swedish coast. It sits on a large stone plinth, creating the impression that the glass part ‘floats’ above.

At the heart of the building is a generous internal atrium with panoramic views, comprising an entrance lobby, cafe and break-out space, as well as catered conference facilities and space for social events. Access to the floors above is via a feature staircase or glass lifts that further animate the atrium space.

Grant Brooker, who led the design of the building said:

“We wanted to create a very strong base that directly connects to and celebrates this unique waterside location and lifts the building above that level – so that there are uninterrupted views from the ground floor to the strait and the surrounding harbour.”

The layout of the interior spaces has been tailored to the pharmaceutical company’s requirements, with offices and laboratories situated on the edges for quiet work while meeting spaces are placed towards the core of the building, overlooking the top-lit atrium and other social spaces.

“For such a significant project it was vital that the building reflected the personality of the organisation and that it would create a collaborative and flexible working environment to carry them through the next century.”

The technical plant and building cores are incorporated into the cantilevering roof form, giving it a sleek profile. The geometry of the atrium roof is a form-found, glazed catenary gridshell, reflecting the forces acting upon it, allowing for thin, lightweight structural members. Daylight streams into the interior spaces, creating a light-filled, unique workplace that brings the whole range of Ferring’s activities under one roof. 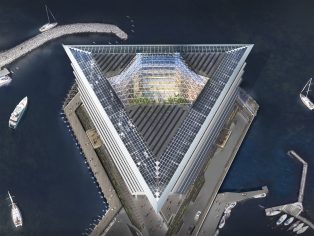