Architectural firms from France, Sweden, Ireland, Germany and the United States, as well as many leading and up-and-coming firms from around Britain, entered the competition to design an innovative new stadium for Forest Green that will be the centrepiece of the ￡100million Eco Park development – a 100 acre sports and green technology business park proposal beside junction 13 of the M5 in Gloucestershire.

The shortlisted architects are:

“We originally said we’d draw up a shortlist of eight entries, but we’ve had such a fantastic range of designs from across the world that we’ve had to squeeze an extra one in.

“The shortlisted architects will now work up their designs in more depth, and I’m very excited to see what comes next.”

From the nine shortlisted entries, FGR will select two finalists, who will be paid an honorarium and produce a scale model – the winning design will be unveiled in September.

Half of Eco Park will consist of state-of-the-art sporting facilities, including the new stadium, grass and all-weather training pitches, publicly accessible multi-disciplinary facilities, and a sports science hub.

The other half will comprise a green technology business park with sustainably built commercial offices and light industrial units, giving Eco Park the potential to create up to 4,000 jobs, including room for the continued expansion of green energy company Ecotricity, who have submitted the overall proposal and who are already the biggest employer in Stroud with 700 people located across four sites.

The proposal will also see the development of a nature reserve on the site, a potential public transport hub, including a Stroud Park and Ride, as well as help with the restoration of the Stroudwater canal. 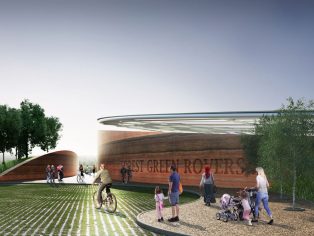 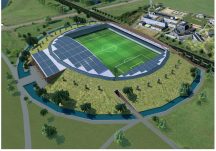 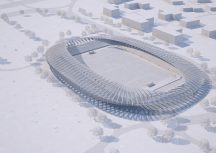