Ford Windows racing ahead after 40 years

Sheffield-based fabricator and installer Ford Windows is celebrating a new milestone in its continuing growth and development – its 40th year in the industry. And, despite its maturity, the company is continuing to grow.

“Our business has seen double-digit growth over the past four years and we’re currently on target to maintain this through 2017.”

The company now fabricates 2,000 windows a week with 180 staff in Sheffield and is now the premier new build fabricator in the North of England and produces another 400 a week at its East Kilbride satellite operation, which serves the Scottish market.

And that commitment to service is reflected in a 60-strong customer base that includes some of the UK’s top house builders among its clients – Barratt Development, Persimmon, and Taylor Wimpey to name just three.

“We believe in adding value and reacting quickly to what the customer wants. If there is a problem then we aim to get it sorted in 24 hours.”

The management team has just overseen an investment programme of nearly £1 million that includes the acquisition of two top-of-the-range Stuga ZX4 sawing and machining centres that can produce an extra 800 to 1000 windows per week with only two operators each. These produce Eurocell Eurologik 70mm windows in response to demand from house builders for improved U-values, which the six-chambered design delivers with ease as it is one of the first windows to achieve the UK’s highest possible energy rating: A++.

These machines can also be configured to manufacture other Eurocell windows as housebuilders turn to windows for differentiation in a highly competitive market, where models such as Modus will come to the fore. Modus is specifically designed to meet the growing demand for premium PVC-U windows from discerning homebuyers who want distinctive properties that present a traditional appearance while meeting modern performance standards.

Philip Shackley believes that Ford Windows’ strong relationship with Eurocell has been a key factor in the company’s success.

“We chose Eurocell because of its excellent reputation for fabricator support and innovation. It’s thanks to its excellent product and our own commitment to best-in-class customer service that we have been able to grow to this size and still expand.”

The enhanced security offered by its doors and windows is accredited by Secured by Design, the crime prevention initiative developed in the UK by ACPO CPI (Association Chief Police Officers, Crime Prevention Initiatives), as well as the recently introduced security requirement of the Building Regulations, Approved Document Q. 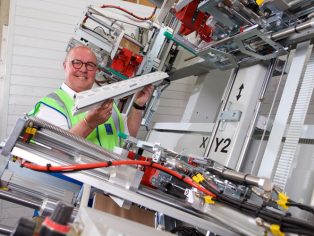