The St Michael’s Partnership, formed by Gary Neville, Ryan Giggs and Brendan Flood has joined with Rowsley, BCEGI and Manchester City Council, to reveal the first images of their new city centre development.

“We have designed two slender, elegant towers for the site, which sit very much as a pair using the same sleek black aluminium cladding, yet with differing heights and arched crowns. Their appearance will change as you move around the city. Together they provide a dynamic addition to the skyline that will position the scheme in Manchester both physically and within the marketplace.”

It is estimated that up to 300 jobs will be created during construction as well as a further 1,000 once the development is complete. The scheme will also provide the Reform Synagogue with a brand new facility.

A public consultation exhibition will take place at the beginning of September. 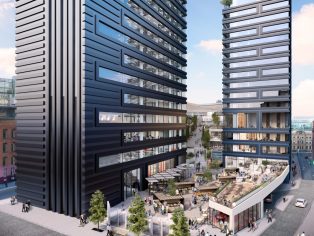