The Fitzjames Teaching and Learning Centre at Hazlegrove School in Somerset by London-based architects Feilden Fowles has won an RIBA South West Award 2015 and the RIBA South West Client of the Year Award 2015. The jury commented that the ‘building is a testament to the fact that the client-architect relationship was extremely capable of delivering stunning architectural solutions that inspire and enhance the users’ experience’.

Hazlegrove is an Independent Day and Boarding Preparatory School for pupils aged two and a half to 13 years. The school occupies a 17th century Grade II listed house and is set in 200 acres of parkland. The Fitzjames Teaching and Learning Centre, which officially opened this academic year, embodies the school’s ambition to instil a love of learning, enquiry intellectual rigour, by providing flexible teaching and learning spaces in an innovative arrangement to encourage independent learning. Located at the end of two key axes in the school campus, the brick building and surrounding external courtyard creates a new academic hub at the heart of the school’s Grade II listed campus.

The design is informed by the research work of educational theorist Bart McGettrick, who was consulted early on in the design process shortly after Feilden Fowles’s appointment in 2012. This led to the exploration of ecclesiastical and monastic typologies, which are widely accepted as successful spatial models for education. The result is classrooms and break out spaces designed around a large central resource space, in which students can work in small groups and use resources outside the classroom context whilst being passively supervised. The flexible spatial configuration, degree of visual transparency and acoustic control combine to ensure a successful balance between more traditional classroom environments and the open resource space.

‘As well as being an architectural and constructional triumph, we believe it makes a clear and strategic statement about the future of education. Its semi-open-plan design allows pupils to learn with an increasing amount of independence, breaking out of the classroom and utilising the technological resources that they have, literally at their fingertips. This will enable them to become equipped for the future as confident, independent and inter-dependent learners.’ 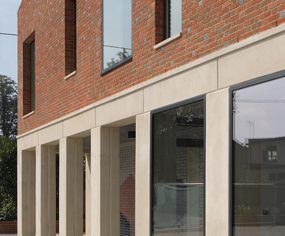