The project is a sustainable urban extension to the north east of the city.

Designed by architects Pollard Thomas Edwards and Alison Brooks Architects, the individual and characterful new homes have been partly inspired by central Oxford’s 19th century residential neighbourhoods, and will include a striking crescent of three storey townhouses.

Alongside providing 237 new homes in a mixture of tenures, this first phase of development will form a gateway to Barton Park, connecting the new community with Oxford city centre.

The project is led by Barton Oxford LLP, a development partnership between Oxford City Council and property investment and development company Grosvenor Britain & Ireland (Grosvenor). Hill was appointed by the partnership to develop the first phase of homes in January 2015.

“This is great news for Oxford. A lack of new homes is putting pressure on local families, and so investing in developments like Barton Park is vital if the city is to continue to grow and prosper.

“Barton Park is a landmark development for Hill and our design team have worked hard to incorporate Oxford’s heritage into the new homes, while creating a modern and sustainable extension of the city’s north eastern edge. We’re very pleased that the council and the local community have been supportive of our plans and we are looking forward to starting work on site.”

“I am delighted that with this approval, we can now expect to see what will become the new extension of the Barton community take shape as the first 237 homes are built. Despite proposals by the government that will make delivering new affordable homes in the city even more challenging, the Council remains committed to meeting Oxford’s housing need and the new Barton development reflects this ambition.”

The first new homes will include a selection of apartments and a number of large family homes with a fourth of all new homes designated as affordable properties managed by Oxford City Council.

Barton Park is located to the north east of Oxford and close to the A40, with excellent links to Oxford city centre which is just a 20 minute cycle ride away and within close access of the new Oxford Parkway railway station, which has direct services to London Marylebone.

The scheme is the first significant residential development in Oxford for many years, bringing 885 new homes to the area as well as a new primary school, food convenience store, two children’s play areas, communal gardens and allotments and a new junction onto the A40.

Aa new linear park is also proposed which would introduce a landscaped green space alongside Bayswater Brook. Sustainability has been a key feature of the development also, and 20 per cent of Barton Park’s energy needs will be generated by on-site renewable solar power.

Hill will commence construction on site in the summer of 2016, following the first phase of infrastructure works, with the first residents expected to move into the new homes in summer 2017. 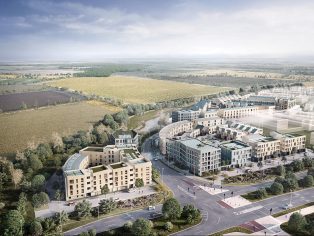