The Finnish Music Hall of Fame – a museum showcasing the history of Finnish music as well as contemporary Finnish music – is set to open in Pasila in October 2019, simultaneously with the Mall of Tripla, parking facilities and the new Pasila station. The complex, covering nearly a thousand square metres, will offer a broad view into the Finnish music scene in an innovative, interactive and technologically advanced environment.

“The goal is to provide a living room where music lovers from all over the world can return to again and again,” says Mikko Vanni , the project’s leader and Managing Director of Life Style Invest Oy.

Along the lines of the other Music Hall of Fame museums in Sweden, Norway and Denmark, the museum will cover music from different decades, and focus on the entire spectrum of Finnish music. It will present profiles through films, videos, photographs as well as various items, interiors and infotainment elements.

The content design is the work of the awarded Berlin-based media artist Christopher Bauder and Whitevoid Interactive Art and Design, a design studio founded by Bauder. Whitevoid has designed and implemented several well-known art projects and light installations around the world. Staffan Holm and Mattias Hansson, who founded and still run Stockholm’s Abba the Museum, have also taken part in the project’s conceptualisation and design. The total investment in the concept and content of the Finnish Music Hall of Fame amounts to about five million euros.

Tripla offers the museum a unique setting. The museum can be entered either through the shopping mall or directly from outdoors, through the terrace square. The Mall of Tripla also houses a one-of-a-kind event area of approximately 3,000 square metres which the museum can use, providing year-round program to residents and travelers alike.

This location is ideal for the museum, since it is easy to reach from anywhere in Finland. In addition to the shopping mall’s estimated 40 million visitors, who will bring a flow of customers to the museum, the museum itself will attract visitors and out-of-towners.

Life Style Invest Oy’s partners in the project are More On Ltd and Custodian Oy.

The Mall of Tripla is a shopping mall to be constructed as the centre of Central Pasila. In terms of the number of retail spaces, it will be the largest in Finland and have the best commercial location in the country. The Mall of Tripla offers a total of 85,000 m² of rentable space for some 250 operators. The shopping mall will be opened in the autumn of 2019, at the same time as the parking facilities and the new Pasila station. The project venture company developing the Mall of Tripla is owned by YIT, Etera, Onvest and Fennia. 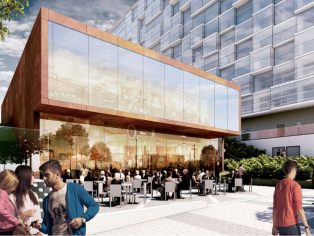