Creating the ideal glazed facade is always a challenge – but never more so than when it also has to accommodate large, unpredictable amounts of movement. This was the challenge faced by Facade & Glazing Solutions UK Ltd. (FGS) at The Macallan whisky distillery in Speyside.

Macallan owners the Edrington Group commissioned an iconic new distillery and visitor experience which would welcome visitors while remaining sensitive to the beautiful surrounding countryside. As part of the £140m project, FGS was commissioned to design, manufacture and install a glass facade – which, as well as looking stunning, would accommodate the deflection of the building’s striking timber and turf roof.

Comprising five circular structures that form the distillery’s production rooms, arguably the most distinctive feature of the new Macallan site is its rolling grass roof set over a sustainable Glulam timber structure: the building is set directly into the landscape so that the ground rises to cover the distillery.

Brought to the project by main contractors Robertson Construction, FGS was commissioned to design, manufacture and install The Macallan distillery’s new glass facade. This was a project which brought with it a unique set of challenges, which led FGS’ Contracting and Facade Design & Supply divisions to collaborate at the tender stage to provide the ideal specification for architects Rogers Stirk Harbour + Partners. This meant that FGS’ design was well supported technically, allowing the specification to be fulfilled with little difficulty.

The roof of the distillery is one of the most complicated timber structures in the world and was expected to provide up to a possible 60mm downward deflection and 38mm outward deflection, so FGS had to ensure that the main facade screen could accept this level of movement. Solar control was also a high priority for the project: it was important that the building’s temperature should remain as consistent as possible to ensure comfort, energy efficiency, and reliable conditions for distillation.

For the main facade, FGS installed 59mm thick units of laminated heat strengthened safety glass (approximately 3m wide x 3.5-4.5m high), structurally bonded to structural fins made from 33mm thick laminated toughened glass. To combat movement and deflection in the glass caused by the Glulam roof structure, FGS had to introduce a pin joint to the base of the glass fin to limit the outward movement.

To insulate the glass units and limit heat exchange, the glass was retained in a thermally broken channel at its base, which was designed especially for the project by FGS. This enabled the glazing to function efficiently as well as aesthetically, allowing the installation of glass units which span continuously from the floor slab to first floor level while providing a contained thermally broken solution throughout. The facade glass is also retained in channel at its head; however, to allow it to accommodate the anticipated deflection of the roof, the channel was not fixed directly to the Glulam structure.

Arguably the distillery’s most striking glazed feature is the Cave Privee, a stunning 3m-high curved glass viewing deck and function room located in the visitor area. This was created using 41mm toughened double glazed glass units, both straight and curved, comprising 10mm panes of SGG Securit Planibel for the outer and 10mm Securit Planiclear for the inner pane. The units were then glazed into steel channels at the head and base, and direct fixed to concrete slabs.

“This was a fantastic project for FGS to be involved in. With a range of complex challenges to overcome – not least in creating a specification that would accommodate the large amount of deflection caused by the grass roof – having FGS’ Contracting and Facade Design & Supply teams collaborate on the project ensured that every decision we made was supported with a wealth of technical expertise.”

“The successful construction of this exciting new distillery and visitor experience has been made possible through hard work, commitment, innovation and collaboration driven by our team. Our partners… have been with us on every step of the journey and the success of the project has been due to their dedication, professionalism and unwavering commitment to excellence.”

“This once-in-a-lifetime project is one that Robertson has been honoured to be part of. The complexity of the construction work required a huge effort from various teams within our business, and their passion and dedication for the project is clear when you see the completed distillery and visitor experience.” 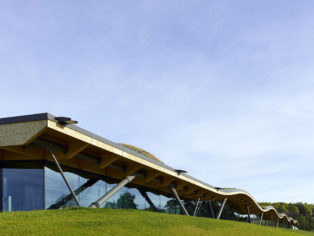