Newcastle City Council has approved an application for planning permission submitted by FaulknerBrowns Architects, on behalf of Union Property and Meliá Hotels International, for the construction of a four star hotel in a prime riverside location on the iconic Newcastle Quayside.

The hotel will comprise 161 guest bedrooms; conference facilities; resident’s fitness suite and an exciting new bar and restaurant offer on the ground ﬂoor, which will provide both the public and hotel guests with outstanding views of the city’s world-renowned riverscape.

The hotel will be built on one half of a site previously occupied by offices for British Telecommunications (BT) constructed in the 1990s. Due to insufficient demand for office space at the location following the exit of BT in 2011, the two blocks of office accommodation have remained largely vacant since. With the works to convert the western block into a Travelodge hotel complete, the submitted plans propose the demolition of the eastern block and construction of an INNSIDE by Meliá hotel in its place.

Bringing the entire site back into use with two hotels has great potential, not only in breathing life back into the western side of the Newcastle Quayside, but also in providing a renewed link between the site and the successful redevelopment of the city’s nearby Stephenson Quarter.

The ‘L’ shape form of the building’s principal block contains guest rooms within a highly efficient plan arrangement, at a comparable height to the adjacent Copthorne Hotel. The lower block opposite has been scaled to respond sympathetically to the neighbouring grade II* listed Quayside Bar and to maximise views out to the Quayside.

The building’s external appearance draws reference from the industrial heritage of the site and the rich precedent in the locality, including the prominent Turnbull’s Warehouse, adjacent residential properties and historic buildings along Sandhill Road. A textured buff brick has been selected as the predominant facade material with dark bronze elements placed to echo the rhythm created by the neighbouring High Level Bridge structure, providing a strong vertical emphasis.

The building’s large expanses of roof are planted with sedum to increase biodiversity, provide visual amenity to hotel users and enrich the buildings appearance from city vantage points.

“Since 2011 this site within Newcastle’s richest social and cultural destination, has been hugely under-utilised and it is a great pleasure to be able to bring it back into use. These plans will not only provide an exceptional hotel experience for guests in this vibrant quarter of the city, but an exciting bar and restaurant offer from which visitors can savour the world-renowned sights of the Newcastle Quayside.” 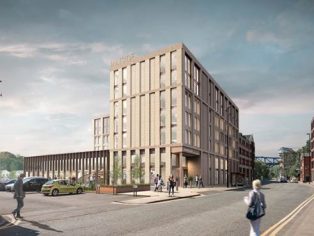 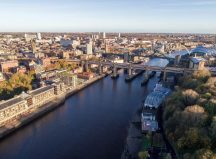