Farrells vision for a Northern Gateway around a new HS2 hub station at Crewe has been released following the Chancellor’s announcement that HS2 will arrive there six years early, in 2027.

On the day that the government have announced accelerated delivery of HS2, adopting Farrells previous proposals for a HS2 hub station at Crewe, the architect planners have released an ambitious new vision for the town. The proposals, developed for Cheshire East Council, build on Crewe’s long tradition of connectivity through rail, whilst enabling its future growth within a vibrant ‘Northern Gateway’ of constellation towns linked together by excellent transport connections.

The Chancellor’s announcement brings all the benefits of HS2 to the north west, 6 years earlier than planned. Farrells growth and transport vision is for Crewe to continue and grow its role as a vital hub within the north west of England, connecting the Northern Powerhouse and Midlands Engine growth areas. The study shows that within the Northern Gateway – spanning Cheshire through Stoke to north Staffordshire and Shropshire – there is the potential for over 120,000 jobs and 100,000 homes, all generated by an HS2 hub station.

Farrells have a unique and unparalleled track record in planning and designing world-class, high speed rail hubs. In December 2012, the longest high-speed railway line in the world was opened in China which is bookended by Farrells stations in Beijing and Guangzhou – two of the largest in the world. 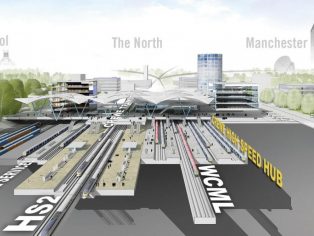