Designed by Farrells and developed by Mount Anvil, The Eagle located on City Road, just north of Old Street roundabout in London, creates a new landmark building for this fast-developing area, whilst drawing on the heritage of the site to establish a modern-day Art Deco icon.

The project is a piece of city making, in the long tradition of Farrells commitment to mixed use and mixed heritage with new build. It includes the planning and design of an entire urban block, much like the Farrells designed Comyn Ching Triangle, which is now being considered for listing by Historic England.

The project takes its name from the redevelopment of the existing 1930s Art Deco building, Eagle House, which has also influenced the design of a new and carefully integrated elliptical tower, of 26 storeys. There is mix of different uses, including 276 high quality new homes, 1,800sqm of retail and 3,500sqm of workspace, as well as a mix of old and new buildings.

The conversion of Eagle House, from office accommodation to residential units, has informed the overall design of the project. Art Deco influences define the scheme, from its external aesthetics down to its interior design features, setting it apart from the wave of new developments in the area and across London.

Originally appointed to design the masterplan for the scheme by Groveworld, the site sat dormant for 3 years before Mount Anvil acquired it and reappointed Farrells to the project. The developer worked in close collaboration with the practice to ensure that the highest quality materials and design standards were applied throughout.

The new building’s limestone facade references the adjacent Moorfield’s Eye Hospital, and the traditional masonry and stonework of the historical buildings that populate the area. Whilst dark granite at the base of the structure and granite paving at street level reference the patterned colour façade of Eagle House. A bold vertical grey and black design has been added to the existing façade of Eagle House to enhance its elegant Art Deco proportions, along with the addition of new Art Deco style ironmongery and signage.

Sitting on a six-storey raised plinth, the new tower acts as a landmark on the urban axis of Old Street and City Road. The height of the plinth runs parallel with its existing neighbours, and double-height windows at street level create an active retail streetscape. The graduated plinth, along with the streamlined form of the tower above, ensures that the project does not domineer the street.

The buildings sit around a central courtyard, fully permeable to residents and the public, providing an active but peaceful space away from City Road. With seating areas and a flourishing landscape design, the courtyard acts as a connection point for the different uses of the building.

‘The redevelopment of Eagle House represents a key milestone in the transformation of this part of the city. The ground-breaking, mixed-used buildings will enable this area to provide the very best workspaces and facilities, as well as charcetreful and high quality residential units with a mix of sizes and tenures.’

‘This project is at the forefront of progressive urban design thinking, drawing on the character and identity of the existing art deco buildings which have been lovingly restored and brought back to life. The tower has been perceived as part of an urban block, with shoulder buildings to break up the scale, acting as an elegant addition to the skyline and a new landmark for London.’

Situated in the heart of London’s Tech City, just a couple of hundred metres from Silicone Roundabout, the project includes flexible co-working office space for start-up businesses. Alongside the scheme’s core offering of shared-ownership and private housing, onsite facilities for residents include a gym, spa and screening room.

With their contribution to the project encompassing masterplanning, architectural design, restoration, landscape and interior design, The Eagle demonstrates Farrells’ multi-disciplinary approach. Subtle Art Deco features throughout the scheme, from decorative mosaics in the bathrooms to feature lighting in the lobbies, illustrates the thoughtful consideration applied down to the smallest detail.

‘Many of the 1930s internal features have been retained and integrated into the interior design of the communal and interior spaces of the apartments. Original features such as columns and masonry details have been exposed and retained where possible. The scheme re-energises a neglected historic building, re-integrating it into the City, but also realises the potential of a key site in this historic and important part of London.’

The Eagle is one of the first buildings to complete on City Road since its recent construction boom. The project acts as a catalyst for change whilst honouring the heritage of the site, exemplifying how new residential developments can connect with the existing fabric of the area. 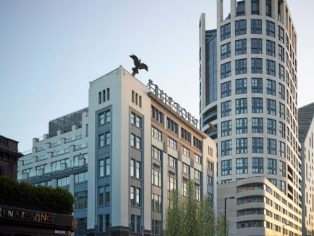 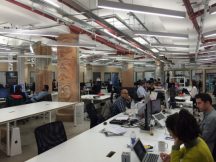 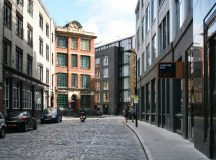