Commissioned as masterplanners and architects for the first phase, Farrells are delivering the vision for this strategically significant location in Shanghai. The Lujiazui Central Financial District of Pudong Area is the first national financial zone in China, built on Shanghai’s economic and cultural foundations.

The vision is to create a lively, vibrant, and iconic destination as an extension or ‘missing piece’ of the Pudong district, complimenting the Central Business District. The project comprises two office towers within the wider masterplan, now known as the Lu Jia Zui Harbour City, has a close relationship with the surrounding buildings and landscape of the area. The two towers, along with the integration of several office and residential buildings, act as a gateway into the retail element of the site with a podium and several shopping ‘villas’ sitting above ground, linking with the old factory region to the north. The retail areas are linked underground throughout the site, enabling easy pedestrian circulation while protecting the vehicular routes above ground. There will also be a large sunken plaza providing a sheltered shopping space, and the individual plots will be linked via bridges.

The urban design and architecture has been heavily influenced by the history of the Pudong shipyard. The design of the buildings are inspired by traditional Chinese boxes and tea chests, while a development to the west is inspired by the shape of a ship. The waterfront promenade is extended from the central Pudong and is envisaged as a key piece of new public realm to celebrating the rich history of the area with events and cultural activities including Kengo Kuma’s Shipyard 1862 Theatre.

A series of underground linkages and sunken plazas are proposed to connect the metro station to the riverfront promenade, and to open up the underground retail which creates a second groundscape of outdoor plazas for cultural events. One of the key principles for the masterplan is to create multi-layered connections from the hinterland to the riverfront. This urban permeability is crucial for the district, as it was ‘cut off’ by an arterial road. For example, Jimo Road creates a pedestrian friendly link with arts and culture related shopping experiences, which leads the public towards the Cultural Centre and riverfront.

“The architectural concept for the two office buildings is stacked cubes, inspired by traditional Chinese boxes and tea chests. These are stacked to form the building massing – two cubes for the taller tower and a single cube for the lower tower. The taller tower also has a ‘slipped-out’ volume that incorporates the large floorplates of the banking hall.”

“The resultant design creates two distinctive buildings which work together as a family. This simple and logical approach to the building massing also informs the facade design where a series of vertical fins, solid and glazed panels are combined in varying patterns of intensity and complexity, to enhance the architectural concept of the project.” 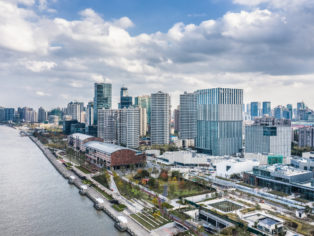 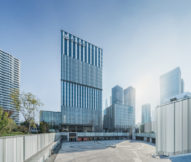 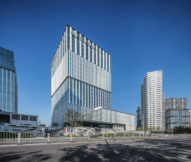 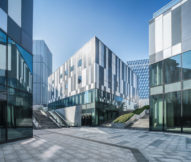 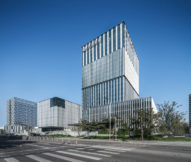 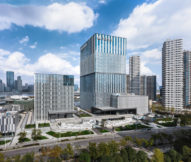 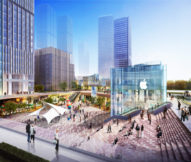 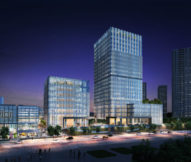