Having celebrated 50 years in practice in London in 2015, this year marks 25 years in Hong Kong for Farrells. Taking the opportunity to explore their contribution to the Hong Kong landscape and dig deeper into the big issues for the built environment, Farrells are running exhibitions and activities under the title Urban Dialogue.

At the Fringe Club, a major exhibition revealed Farrells profound understanding of how cities work and how they can be improved, with each project responding to its particular context. The exhibition showcases 25 years of Farrells projects in relation to geography, culture and history. Projects include KK100 in Shenzhen, Kennedy Town MTR station and swimming pool and the new urban district and major transportation hub of West Kowloon.

“During its 25 years of business in Hong Kong, Farrells has created iconic yet people focused architectural landmarks that blend into our cityscape seamlessly. These include the Peak Tower, the Kowloon Station, the new Kennedy Town MTR Station and the spaceship like Kennedy Town Swimming Pool, to name just a few for a glimpse of the breadth and depth of the amazing works of Farrells.”

“Through continuous dialogue with the city, Farrells many projects here have brought out the best of Hong Kong’s substance. They have enriched the local character and enhanced the way people live, not just by providing functional convenience, but aesthetics and a human touch. That is why Farrells masterpieces always find consonance with the local community. And that is why this exhibition is fittingly titled the “Urban Dialogue”.

The exhibition ‘Urban Dialogue – Icons’ was held at the Peak Tower, generously sponsored by Peak Tramways. Opened to the public in 1997, the Peak was Farrells first project in Asia and has become a cherished landmark, its unique bowl shape inspiring many of the city’s souvenirs and tourist campaigns. The centre piece of the exhibition is a full size ‘Glitter Dome’, featuring the competition winning model of the Peak, which celebrates the joy that the building continues to bring to millions of visitors from all over the world.

As well as celebrating the past, there is a lot more to look forward to. In collaboration with Herzog & De Meuron, Farrells are designing and delivering the M+ Museum which is a signature waterfront building within the new West Kowloon Cultural District, one of the world’s most exciting new cultural developments.

At the Urban Dialogue Workshop ‘Shaping Hong Kong’, participants were asked to break into groups to discuss planning issues and possible solutions. The audience then added their ideas to a giant model of the Victoria harbour area. Like completing a big puzzle, the workshop attempted to fit the pieces together, forming a broad vision for tomorrow’s Victoria Harbour.

Continuing their tradition of thought leadership, Farrells have proposed a new town called “Nam Tong” (藍塘) as an alternative to the Development Bureau’s “East Lantau Metropolis” proposal. Nam Tong is a conceptual new town for 500,000 residents at the eastern end of the urban area, on the site of the current Tseung Kwan O Industrial Estate, the Area 137 Fill Bank, as well as an area of newly-reclaimed land outside Victoria Harbour.

The proposal includes a new MTR harbour crossing to “unlock” this land with Nam Tong designed as a transit-oriented community. It will be well-connected to Hong Kong Island and East Kowloon, through an extension of the Kwun Tong Line. You can find out more about the proposals here.

Speaking to the Governing Council in the Legislative Chamber of HK, Sir Terry Farrell said:

“The proposed East Lantau Metropolis is a very substantial and radical proposal. Compared with other options, it is excessively expensive and infrastructure is excessively heavy. It is very inflexible because of this. By extending the Island Line with the addition of just three new stations, you can create a whole new district which is better connected to central and east Kowloon. It has significantly lower environmental impacts too.” 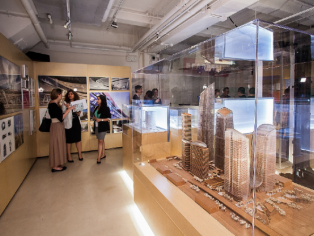 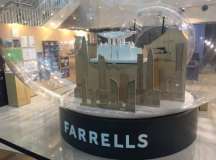 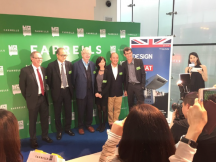