Exciting new developments currently going up in Kensington and Chelsea

An exciting collection of new-build developments going up in Kensington and Chelsea.

This year’s prospects for luxury real estate in Kensington and Chelsea specifically, and Prime Central London more broadly, appear to remain positive given the ongoing negotiations between the UK and EU as well as new Tax Regulations. For affirmation of this assertion, you need only look at some of the positive factors and metrics associated with the Kensington and Chelsea property market, including the slew of exciting new building projects that are planned or currently under development in the area.

In fact, interest in properties for sale and lettings in Chelsea and Kensington are multiple and, in many cases, understandable from a domestic point of view. From its world-class shopping districts and access to theatres and museums, to its distinctive architecture and elegant leafy garden squares, Kensington and Chelsea is an enviable and highly desirable place to live in Prime Central London.

Certainly, the ongoing development of several new high-end real estate projects in this neighbourhood would seem to echo and amplify this opinion. After all, this represents a considerable investment of capital, quality and expertise, all directed towards creating new residential and commercial premises in Kensington and Chelsea thereby increasing the real estate opportunities in this Borough.

The Glebe – An Entirely New Standard of Excellence
The Glebe, a development which is currently underway at 36a Glebe Place, just a few steps from the world-famous Kings Road, is set to introduce a whole new level of extravagance to the Prime Central London property market. Upon completion, this residential development will reputedly be the “most expensive address in London”, a title that currently belongs to the Candy brothers’ One Hyde Park.

The Glebe is centred around a former early 20th century school that sits on an extremely rare, one-acre plot of land in Chelsea, purchased by the development consortium behind the project for £85 million. When completed, this project will offer nine properties for sale in the heart of Chelsea, including a duplex penthouse with a huge roof terrace, two detached five-storey villas and six apartments. Each residence will come with its own individual swimming pool and will boast only the finest materials and finishes.

The four-bedroom apartments will each feature a spacious master suite, a study, a drawing room and a dining room. The two villas will showcase seven bedrooms, as well as a separate master suite, a sauna, a therapy room, a lift, a gym and private gardens.

These new properties for sale in Kensington and Chelsea, created by a team of world-class architects and designers, promise to elevate opulence to new heights. Indeed, the very existence of The Glebe, a development and the luxury it provides, signals not only the current thriving health of luxury real estate in this central London area, but also points to a future that looks increasingly bright.

Cinema Conversions – An Innovative Concept
On a somewhat different but parallel note, cinema conversions seem to be the new trend when it comes to real estate development in Kensington and Chelsea. A series of innovative cinema redevelopments look poised to make an impact of their own within this sought-after neighbourhood. It is of course essential that in all cases, developers take local community feedback into consideration.

No. 279 Kings Road
Situated directly on the Kings Road (which is known throughout the globe for its chic shops and the cutting-edge Saatchi Gallery), this development will transform the former Cineworld Cinema into a new, high-end, mixed-use property.

The plans call for upscale retail units, a new two-auditorium cinema (to be run by the boutique Everyman brand), and 11 luxurious residential apartments that will be laid out over the second through fourth floors. Scheduled to be completed in late 2018, this attractive building will provide a new selection of residential properties for sale in a highly desired part of Kensington and Chelsea.

Curzon Chelsea
Moments from No. 279 is another Kings Road development at 192-222 Kings Road. This too will be a cinema conversion and represents a significant departure from its fellow project on the same street. Also intended for mixed use, this development will not only feature a cinema and shops. Yet, where it truly differs is in its residential offerings.

There will be 47 residential homes, which will take the form of one and two-bedroom apartments. None of them, however, will be for sale.

Cadogan Estates, the developer of this project, intends to offer all of these units as rental properties to be retained and maintained under their management due to an increase in demand from the private rental sector.

The Kensington
High Street Kensington has seen somewhat of a transformation over the past decade, notably with the introduction of large new builds such as Holland Green, One Kensington Gardens and 375 Kensington High Street. Plans are in process to radically revamp the Odeon Kensington Cinema, which owns an ideal location on High Street Kensington. The main focus of this new 125,000 square-foot development will be residential, with 20 luxury homes scheduled to be built. In addition to the residential properties for sale at this development in prime Kensington and Chelsea, the finished scheme will also include a new cinema, as well as retail and office space.

The great effort, expertise and resources directed towards the conceptualisation and construction of these new cinema conversion developments only lends further credence to the signs and portents that herald a robust future for Kensington and Chelsea real estate. 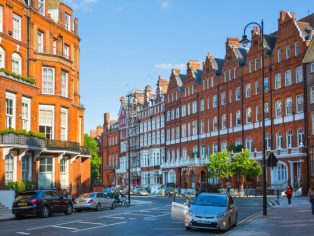