Excellence in construction on show at awards

Constructing Excellence in Wales (CEW), the Welsh Government sponsored organisation which encourages the industry to rethink and improve the construction process, has announced the winners of its annual awards, which include a school modelled on the layout of a castle, commercial and industrial buildings which use waste heat and power to generate their own heat and electricity, and a building project which doubled as a hands-on work experience facility for construction students.

The Constructing Excellence in Wales Awards, held at the SWALEC Stadium in Cardiff and presented by BBC Wales’ Jason Mohammad, reward those organisations and businesses helping to improve construction in Wales by setting a high standard of best practice and collaboration. The Awards are now in their 7th year, and attracted over 100 entries from all parts of the construction industry across Wales, and from both the public and private sectors.

“Year on year, we see higher standards of best practice and collaboration across organisations in the entries that we receive, and this year has been no exception.

“What has become even more evident this year is that organisations working in the construction sector are not only complying with guidelines on sustainability and waste reduction, but are going above and beyond to make these best practices part of their everyday way of working.”

Over the past ten years, Constructing Excellence in Wales has been working to improve the performance of clients and the broader construction industry in Wales, helping to deliver value for money and to meet Welsh Government targets including reducing construction waste and carbon emissions.

Winners included the £28million Taf Ely Learning Campus in Nantgarw (pictured) which won the Project of the Year Award. The Campus, constructed by Laing O’Rourke for Coleg Morgannwg, scored highly on waste minimisation and sustainability and made extensive use of recycled materials and low carbon technologies, all contributing to the achievement of a BREEAM Excellent rating. The judges were particularly impressed by the strategic use of the scheme as a learning facility for construction students on the existing campus at Nantgarw, allowing them to turn the scheme into real-life work experience.

The Innovation Award was won by Dawnus Construction Limited and Powell Dobson Architects for their work on the new stores facility and visitor and training centre at Tata Steelworks in Port Talbot. The judges were impressed by the innovation of the design for the stores building which exploits the local environment to provide a renewable source of hot water and electricity. Waste heat and power generated by the adjacent steelmaking plant is channelled to provide all the electricity needed by the stores building. This contributes to the facility being the largest carbon negative development in Wales, meaning that it offsets more carbon than it generates.

Constructing Excellence in Wales also champions the benefits of working together, and actively demonstrates the benefits of long term value in construction, as opposed to lowest price in the short term.

Winner of this year’s Achiever’s Award was Vince Hanly, Service Director for Procurement at Rhondda Cynon Taf County Borough Council. Through his work on major projects such as the Porth Relief Road and the Church Village Bypass, Vince has shown leadership and excellence in procurement through best value, which doesn’t always mean lowest price, meeting targets on sustainability along the way.

“Value for money is as important now as ever, but projects need to be sustainable in the long-term in order to give true value. What has been shown time and time again is that lowest price doesn’t necessarily equate to long-term value, and this point is proven through the work of procurement leaders such as Vince Hanly who won this year’s Achiever’s Award.

“The Constructing Excellence in Wales Awards is our opportunity to congratulate and celebrate the exemplary work of the industry and to inspire others. It is encouraging to see so many examples of collaboration, innovation and best practice right across Wales; it is proof that this way of working can and does have a positive effect, and puts Wales at the forefront of excellence in construction.” 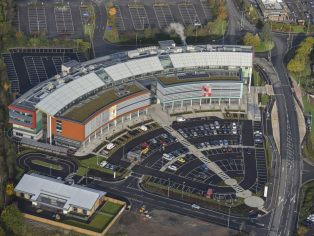