Crown Paints will be previewing new advances to the Crown Trade Timonox range at an event aimed at specifiers in London next month.

The new Crown Trade Timonox Upgrade system will be demonstrated at The Building Centre in London on the 8th September.

For more than 40 years, Crown Trade’s Timonox flame retardant system has played a key role in fire safety – slowing down the spread of flames and ‘buying’ precious time for buildings to be evacuated.

The system, used on walls and ceilings, can achieve the class 0 status required by legislation including the Regulatory Reform (Fire Safety) Order (RRFSO) in England and Wales and The Fire (Scotland) Act 2005.

At the event, the Crown Paints’ team will be talking about how a major advance in research and development now means only one coat of Crown Trade Timonox Upgrade Basecoat, followed by two coats of Crown Trade Timonox Emulsion topcoat, is all it takes to offer protection against the rapid spread of flames and improve a Class 4 surface to a Class 0. Previously four coats were required.

“Crown Trade Timonox can help by slowing down and limiting the spread of flames throughout a building, giving invaluable time for occupants to get to a place of safety.

“For properties with more than 10 coats of conventional, old paint in sound condition we have had an upgrade system in our range for some time which enables the surface to be transformed into a Class 0 surface without the necessity of more costly strip and redecoration.

“Up to now, to achieve Class 0 status, this has involved a four coat application process. Now, as a result of the reformulation, we have reduced the system to three coats, which offers clients considerable savings in labour charges.”

The day will also include ‘Ask The Expert’ advice, with Crown Paints’ representatives on hand to offer guidance on subjects including fire safety legislation, as well as specific application issues. Information on colour scheming and the creation of inclusive environments will also be available. 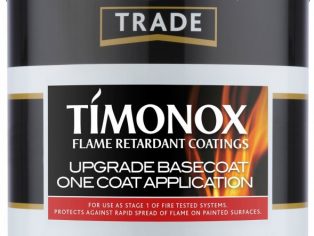