The Ethiopian Orthodox Tewahedo Church in Stockholm, designed by Belatchew Arkitekter, was deemed ‘Highly Commended’ at the World Architecture Festival Awards in Berlin.

World Architecture Festival is the world’s largest international architectural event where the premier buildings of the year around the world are awarded. This year the festival took place in November in Berlin, Germany.

The jury appreciated the strong sculptural feature of the church, it’s connection to history across the borders and the way it offered a civic space to a community larger than the parish.

“Being awarded in an international context like the World Architecture Festival is especially rewarding as it proves that our projects are of international standards”, says Rahel Belatchew, Principal Architect, CEO and Founder, Belatchew Arkitekter.

This project also shows how a building intended for a congregation could simultaneously become a meeting place for a neighbourhood. Bridges are built over cultures for better social cohesion and buildings in the city are optimally utilized. Both these aspects play a crucial role for the sustainable cities of the future, Rahel Belatchew concludes.

About the Ethiopian Church in Stockholm

This project is about creating a place for a community and bringing together an ancient tradition with modern needs in another part of the world.

The building is composed of coloured concrete that takes up the colour of the red African soil and the weight and materiality from the unique rock hewn churches of Lalibela in northern Ethiopia. The feeling of weight being conveyed by the outwardly inclined walls. On the inside, the Scandinavian tradition of wood is visible through large timber frames and panels.

The main feature of the church is its large, round church hall with a central dome. The deliberately introvert volume takes in daylight from above avoiding openings in the façade. The lack of openings in the facade enables the visitor to start an inner spiritual journey without distraction from the residential neighbourhood. The windowless facades also enhance the sculptural feature of the building and emphasises the rough materiality of the red concrete. The dome is made of a copper like metal amidst green roofs. 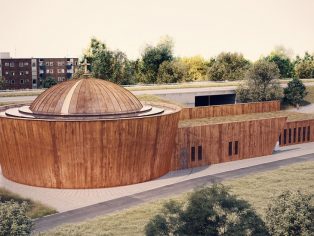