ESH Border Construction has been appointed contractor on a prestigious project to transform the historic City Observatory site on Edinburgh’s Calton Hill, with work commencing this week.

The Livingston-based company will lead a £3million second phase of redevelopment work, opening up the 19th century ‘birthplace of astronomy and timekeeping in Edinburgh’ for public use, while significantly enhancing it with a new restaurant and gallery space.

The project – to realise a world-class hub for contemporary visual arts and important new work by local and international practitioners – will last approximately 11 months.

The new restaurant will project over the north-east corner of the site, enjoying stunning panoramic views thanks to a substantial area of westward-facing glazing. It will also be illuminated at night, creating a landmark attraction that will be visible from all around the capital.

The modern gallery will meanwhile provide a subterranean space for artists, audiences and producers, with astronomical instruments and telescopes on display, while the grounds of the site will also be carefully restored.

At the heart of the historically sympathetic conservation project, the revitalised observatory complex – featuring a classical Greek-style design that was masterminded by William Henry Playfair in 1818 – is to become fully accessible to the public for the first time, breathing new life into what had become an under utilised site.

It is hoped that the project – commissioned by a partnership of Edinburgh City Council and visual arts body Collective – will encourage fresh engagement with, and creation of, the arts.

Esh Border Construction says that it is excited by the wide cultural possibilities of its restoration and redevelopment work across the observatory site.

“We are delighted to be part of this landmark project that we are certain will inject new life into a hugely important site in the centre of Edinburgh.

“Historically, Calton Hill was a place for stargazing, but it will now house one of the finest visual arts spaces in the country as part of a wide-ranging attraction that will be open to all.

“It will encourage creative interaction, while still placing a firm onus on the site’s astronomical origins, not to mention showcasing wonderful views over Edinburgh to the Forth Bridges.

“We believe that is a key project for the city, its inhabitants, and its many visitors, helping to further enhance the Edinburgh experience.

“It is also exactly the type of project that Esh Border Construction aspires to work on and we cannot wait to start on the road to bringing the revamped Calton Hill Observatory site to fruition.”

“This is a really exciting project for us to be involved in, representing a diverse challenge that I am sure we will relish.

“There is a massive emphasis here on economic and regeneration objectives, which goes hand-in-hand with Esh Border’s ever-present focus on adding value in the communities where we operate.

“Furthermore, we have been energised by the enthusiasm that has been shown by Edinburgh City Council and Collective in bringing the project to its current point. We hope to maintain that momentum, helping to fully realise their cultural ambitions.

“We have no doubt that the site will excel as an inspiring place of creativity and learning for residents and visitors alike, serving also to celebrate and preserve Scotland’s rich astronomical heritage, and we are very proud to be part of it.” 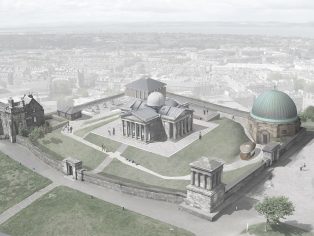