Stride Treglown’s innovative triangular design for a new college in Portsmouth reflects a bigger focus on science, engineering and maths in the curriculum, writes Steve Menary.

A revolution in education that has seen the creation of free schools and university technical colleges (UTC) has also provided a challenge for architects.

As specialisms extend into secondary education, designers must create buildings that reflect these uses.

A new UTC in Portsmouth is part of the employer-led programme offering the STEM (science, technology, engineering and maths) curriculum for students from the start of their options in Year 10.

The STEM curriculum will be offered alongside the regular national curriculum in a project being driven by the University of Portsmouth, the Royal Navy and the city council to accommodate 600 students aged between 14 and 19.

The aim is to provide a specialism for students in electrical and mechanical engineering and advanced manufacturing to satisfy increased demand for skills in these areas from employers and the design needed to reflect this.

“The scheme is aimed at training up engineering technicians, and they wanted it to have an engineering feel,” says project architect Caroline Pitt from Stride Treglown, which teamed up with contractors BAM Construct to bid for the contract. In February 2016, the duo won out.

Describing its design approach, Stride Treglown’s design statement says: “The guiding principle behind the design was to create a building that provides a high quality, energy-efficient learning environment, which feels more akin to a workplace than a traditional school.”

In this way, Stride Treglown has looked to the curriculum to drive the layout and design of the building, which shares a site with the existing Trafalgar School.

At the heart of the project is a light and airy triple height atrium created by the building’s triangular design. The atrium is located at the centre of this triangle, providing a ‘Learning Hub’ which features an integrated dining, social, learning and working area that connects all three levels of the building together.

“The distinctive triangular shape came about because of the site available and a desire not to build too much on the playing fields,” explains Caroline Pitt. “That meant we have a very distinctive atrium area that links with the rest of the building.

“There was funding for a triangular block – and this makes the building more interesting.” She adds: “In the atrium, there is clear lighting at the top with balustrades around them.”

The building also features a two-storey activity hall, as well as a lecture theatre.

The clean aesthetic of the building also reaches out to the engineering ethos with bright colours, crisp edges and clear expression and celebration of functional elements. To achieve this, Stride Treglown specified a simple palette of distinctive materials to reference not just the building’s education specialisms but also the neighbouring Trafalgar School and the wider local industrial context.

A contrast has been achieved by Stride Treglown, specifying a light-coloured brick on the lower part of the building beneath a seamed metal material with a brightly coloured finish. When combined, the materials produce a design with a strong, resilient base, and striking top section that the architect uses to reflect the identity of the institution.

“There’s vertical metal cladding that presents a frontage to the London Road with the studios behind it. We’ve also improved the access by removing trees, which improve the visibility to the public.

“To give the impression of its scientific basis, we went for Vieo cladding. We gave the client various options for the building. We looked at horizontal cladding but that looks too commercial – Vieo looks a bit smarter.

“We had a long discussion about the colours and went with grey to start with but colour of the UTC is turquoise and yellow. Everyone felt it needed livening up.

“We started off with a grey brick on the plinth but everyone felt the same about the bricks so we went for a buff brick.”

The project is on a fast track. Just five months after winning the bid, BAM Construct’s team were on moving on to a tight site to start work.

Before 250 continuous flight augur piles could be sunk, the site had to be surveyed for unexploded bombs.

“Portsmouth was bombed heavily in the war,” says Matt Crookes, project manager for BAM Construct on the Portsmouth UTC. “So, we radar-surveyed the whole site. That showed some anomalies and we probed down 15 metres for the piles, but we didn’t find anything.”

At the very start, new access and egress were installed as well as attenuation tanks under a road, which were essential on a site that offers minimal storage.

While the finished scheme will offer 83 parking spaces for the UTC and Trafalgar School, there is no parking for operatives and all materials suppliers have had to work as part of a Just in Time system.

The building is based on a steel frame, which was manufactured and installed by Norwich-based specialist H Young starting in November. That frame sat on top of the pile caps before the concrete slab was installed – this provided the biggest obstacle to surmount for Crookes’ team.

“That was the biggest challenge as you have to thread the slabs through the frame,” explains Mr Crookes. “It’s like going through the eye of a needle.

“The disproportionate collapsed works was tying the slabs together. Part of that is forming the slab edge and then we had to form the secondary frame system.”

After the main frame was complete, a secondary frame system (SFS) comprised of a light gauge steel frame was added to the exterior of the steel frame with a liner sheet then attached.

Only then could the cladding begin to be added.  The first of the distinctive turquoise panels began going up in late January.

“You think of windows as a functional thing to let light in and curtain walling does the same,” says Andy Newman, BAM Construct’s design manager on the job. “It becomes something else when you incorporate the logo and also creates a strong connection to the road as you can see people working inside.”

On the front of the building between the curtain walling that allows passers-by to see students at work will be a six-metre high and five-metre wide logo, which spans two floors and gives clear identification to the UTC.

On top of the building, Stride Treglown have specified two roof systems, both supplied (and guaranteed) by Bauder. A hot melt system features concrete plinths with asphalt and ballast, while a standing seam aluminium system has been used in the sports hall.

One key aim of the design was to provide a building that is cheap to run.

To that end, an array of more than 100 PV panels on one section of the hot melt roof will provide around 15,000 kWh of electricity per annum. On the ground floor of the atrium there will also be underfloor heating.

“It will be super-efficient in terms of insulation and will be very economical in terms of fuel,” says Newman.

The biggest issue created for the construction team by Stride Treglown’s distinctive triangular design was in the brickwork, and the need for different angles on the joins.

Specialist contractor GP Masonry took away piles of the bricks supplied by Wienerberger to cut and cement pairs to create angles for the corners of the lower section of the exterior wall.

“The key has been to have specified materials that are flexible enough,” says Newman, who adds: “In achieving the building’s form, it’s all about using tried and tested components getting the interfaces right.”

Getting those interfaces right to ensure that the building was airtight was also essential with the, Vapour Control Line between the external and internal facade particularly vital.

“What does make a difference is whether it’s sealed or not and where you can have problems is the interface between contractors.”

Internally, those problems have been overcome through the creation of work zones. Specialist contractors are expected to have completed work in one zone before moving to another.

The interior design specifies a plasterboard system from BG and this is being erected as part of a fit-out programme, which began in January 2017 and will provide a gross internal area of 5,000 m².

The project is due for completion on 24 July 2017 and the first intake of students will arrive after the summer, as a revolution in schooling is evident inside and out at Portsmouth’s new UTC.

A contrast has been achieved by Stride Treglown externally, specifying light-coloured brick on the building’s lower part beneath a seamed metal material with a brightly coloured finish

A contrast has been achieved by Stride Treglown externally, specifying light-coloured brick on the building’s lower part beneath a seamed metal material with a brightly coloured finish 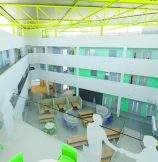 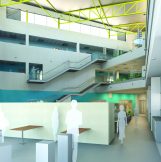 Getting the interfaces right was essential to ensure the building was air-tight, with the Vapour Control Line between the external and internal facade particularly vital