Four decades ago, Enfield Civic Centre was at the cutting edge in the design of public buildings. The notion then of a local authority becoming a commercial landlord would have been largely novel. But then the original building was designed to cater for around 600 people.

That design also had some elements that would leave many in the architectural world incredulous. Glass reinforced plastic (GRP) planters throughout the 10 floors meant that the council needed to employ an internal gardener.

And on the corner of each of the 10 levels are floor to ceiling glass panel doors. Today, those doors offer a view of central London architectural landmarks like the Shard – and also still open up.

“They’re called smoke doors,” says Matthew Mulvany, maintenance programme manager at Enfield Council. “They weren’t designed for the Fire Brigade to get in from the outside, but to let the smoke out.”

Mr Mulvany keeps a safe gap between the doors, which, if opened, offer a direct route to the ground floor.

While the doors remain, the GRP planters are long gone. Just one remains in the office of the council chief executive, who, ironically, occupies what was once the room used by the borough architect.

Designed by Eric G Broughton & Associates and built by Costain, the original building was opened on May 6 1975 by Her Majesty, the Queen Mother.

In addition to some of the design ‘innovations’, the building was also filled with a then highly durable material that was also still all the rage in the 1970s: asbestos.

Around a dozen skips have been needed to strip out the asbestos on each floor as a redevelopment that is turning the council from simply owning office space to leasing it.

The scheme is working from the top down and refurbishment of the ninth and eight floors have been completed, allowing the council to lease out this space to the Royal Free Hospital.

The project is also a chance for the council to change its working environment as part of an initiative, which was originally known as the New Ways of Working Programme but has since been rechristened Enfield 2017.

Work started in 2014 and on completion in August 2017, the redeveloped Civic Centre will be able to hold around 130 people per floor. That number is dictated by fire access requirements, but as the project comprises the refurbishment of floors three up to nine that represents a big change.

“Health and safety and conditions have been the big driver. There was extensive asbestos but the council was also looking to extract maximum value. It’s about maximising the real estate.” If you go into a place that’s never 100 per cent occupied, then that’s inefficient.”

“It’s a culture change. It’s hot-desking but there are other areas too. It will be first-come first-served. It will need policing by facilities management to stop people personalising space.”

Matt Godwin, project designer at Pellings, is keen to emphasise that the design is not simply about cramming more people into a spruced up space.

“There are lockers that allow people to put things away. It’s not just hot-desking. There are more traditional one-to-one desks on the outside. The hot desks in its truest sense will be in the front area.”

With the scheme looking to change the culture of working within the council, the interior design has been crucial in achieving this shift.

The layout on each floor works on a ring effect. On the outer ring are desks, some shared but others with single users. Then a ring of more formal meeting space rings the central core, which comprises more informal meeting space with pods and carpets used to direct users. Mr Godwin adds:

“The space evolves out of the central hub, which is more informal with softer seating. You can already see people using the sofas for a quick chat, then a more formal chat at their desk.”

“We’ve also been careful with the acoustics. That was one of the requirements as work was done to determine which areas require privacy.”

As a result, the glass partitions in the central core, which is decorated in primary colours including the number of the floor, is double glazed and stands more than 40 dB.

The design, particularly in this stylish inner core, is aimed at keeping sightlines free. Taller items, such as photocopiers, are placed by the columns, while above all this hangs the central design feature: the ceiling.

Initially, an oak ceiling had been specified but this fell victim to value engineering.

“I had to battle to stop the ceiling being value engineered out as it was fundamental to the design. What else can you do apart from focus on the ceiling?”

While the original European oak specification has been changed, the client and design team are all pleased with the replacement from Hunter Douglas.

The system is comprised of cassettes of slats made of a West African wood, Ayous, which hang on wood dowels.

“The idea was to add warmth and a feeling of informality, which works well with the curved plasterboard.”

Rigitone plasterboard featuring holes from British Gypsum is also used to create a distinct impact with lights from XAL and sound baffles from Ecophon.

“The lighting in the space is a lot less formal with bigger shades,” adds Mr Godwin, who is based in Bromley. The Project Team also includes includes Donna Staples and Paul Kelly from another of the practice’s office in Barnet.

Pellings has also provided contract administration services, while the project team has sought to source environmentally sustainable solutions for the materials wherever possible.

The stained Ayous used for the ceiling slats is sourced sustainably, while the blue carpet is manufactured from recycled fishing nets supplied from Interface’s Urban Retreat range.

“Most of the materials we have chosen are about transparency. It’s a reasonably new product and very good for what we are trying to do in the central core. We want to define the different zones but we want a softer transition between the spaces.”

A bright colour scheme has been employed the changes between each floor. On the ninth floor, yellow, blue, green and turquoise are used. Move down a floor and one colour is replaced. That will continue as work moves down to the third and final floor included in the work.

“We’ve future proofed it wherever possible as once you take out this plasterboard you have to take out large sections and we wanted to avoid unattractive access hatches. We’ve also tried to keep it as clean as possible.”

This means that access to air conditioning units, or the need to add extra cabling in the mechanical & electrical work can be done without major upheaval.

As part of the project, research was undertaken into temperature variations and there was found to be a difference of four degrees in different parts of the same floor. “A lot of that was to do with solar gain,” adds Mr Mulvany.

A DALI lighting management system has been used to provide a balance between natural light, whilst external works will also see work to the exterior, including the replacement of some glazing panels.

“There was film on the glass but it was breaking down and the sun’s rays were bouncing around and that wasn’t keeping out the solar gain. A later part of the scheme will be to redo the mastic and reapply the film.”

The building has 11 floors each of around 950m2 in size. The eleventh, which is not accessible by lift, includes the plant room. A tenth floor was refurbished in-house under the supervision or Mr Mulvany, who explains:

With the council now a commercial landlord and not just the owner of a building, a 10 out of 10 rating will be needed to justify the rent but Pellings and the construction team in Enfield look on course to be achieving that already. 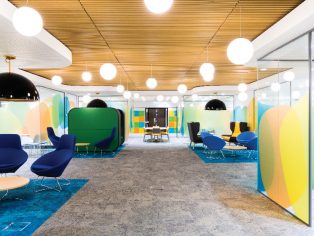