LDA Design is the masterplanner and lead consultant for the project which was submitted for planning approval earlier this year, and subject to approval of the DCO application, it is expected to start on site in Spring 2015.

Mr Cameron was also introduced to a wide breadth of other projects both locally and nationally. LDA Design’s regeneration work includes some of the most recognisable projects in the UK including the redevelopment of Battersea Power Station and masterplan and transformation of the Queen Elizabeth Olympic Park.

In addition the company leads some of the UK’s major development projects and is an advisor to the Royal Parks Agency, Oxford and Cambridge University and Colleges, TFL, RES Group and EDF Energy.

“The government is clearly focused on increasing and delivering energy and infrastructure projects in the UK. We welcomed the opportunity to speak with the Prime Minister about our work on Swansea Bay Tidal Lagoon; as an exemplar project, it will not only help regenerate the area through the opportunities that our masterplan provides, it will also help hit 495 GWh per annum, enough energy to power 155,000 homes.” 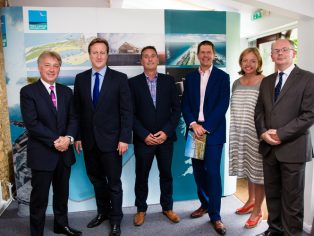