The Endless Stair,landmark project for this year’s London Design Festival,will be sited on the lawn in front of the world?renowned Tate Modern.

Professor Alex de Rijke, director of dRMM, the architects leading the design for the structure, said:

“Endless Stair is a temporary sculpture designed to be endlessly reconfigured. After initially considering a site at St Paul’s Cathedral, the London Design Festival team has decided the best location for the Stair’s debut is outside Tate Modern, Bankside. The programme of modern art and architecture, combined with the Thames panorama of London, provides a context to which dRMM’s Escher?inspired installation can make a distinctive contribution.”

The construction of the Endless Stair, which will be the first?ever such structure to use American tulipwood cross?laminated timber (CLT), is now progressing in Italy and Switzerland. The project, which was conceived in January 2013, is pushing the boundaries of hardwood in construction.

Starting from a fantasy Esher?inspired drawing utilising, for the first time, tulipwood cross?laminated timber (CLT), dRMM and Arup have worked with specialist teams in Italy and Switzerland to research and test the strength of the material and develop the design to allow public access to the structure at this exciting cultural destination.

Expert teams at dRMM and Arup have met the challenges of bringing this intricate design to fruition and fabrication is now underway. Helen Groat, Senior Structural Engineer, Arup, leading on the design of the Endless Stair commented:

“The most fascinating aspect about this project is that we are going beyond typical analysis and code justification methods. We are constantly experimenting, analysing and testing. This is such a great opportunity to apply pure engineering principles to this unique artistic installation, using a material that we firmly believe should be used in more mainstream buildings in the near future.”

In Italy, Imola Legno, a long?established family owned timber specialist, has been making the CLT panels in its factory, one of the most ‘green’ in the country. With a large installation of photovoltaics (solar panels) and either by burning or selling the timber wasteas pellets, the plant is a net exporter of electricity.

To produce the cross?laminated timber, Imola Legno cuts, planes and finger?joints the American tulipwood lumber and assembles the timber into sheets. Three of these sheets are subsequently glued together intoa sandwich to make one CLT panel.

Chad Cole, Production Director of Imola Legno, is fascinated by the potential that the process shows for using the lower grades of a widely available timber. He is sorting the material so that the best timber appears on the outer surfaces, and the lowest quality forms the ‘filling in the sandwich’.

“My idea was to produce an A grade, a B grade and a C grade,”

“This means that, from a sustainability point of view, waste can be minimised by using all of the material’s natural colour and grain variations.”

Nüssli, an international company specialising in temporary, permanent and modular structures, has been commissioned to construct the installation. Nüssli has previously worked on numerous projects, such as the London 2012 Olympics and other large global events, and is currently constructing a ‘test flight’ of Endless Stair at its Swiss headquarters.

“We are delighted to be involved in this ground?breaking project, using the versatile medium of tulipwood CLT,”

“We are currently conducting load tests and making other technical evaluations in conjunction with Arup, and look forward to seeing the finished structure outside Tate Modern.”

Once all the panels arrive fromItaly, Nüssli will build all the flights, complete with their balustrades, non?slip nosings and other elements. After some further testing, Nüssli will load the pre?fabricated panels onto four trucks at the beginning of September, to start the final journey from Zurich to London. Between six and eight Nüssli carpenters, will erect and fix the stair, using a telescopic forklift, to lift the elements into place. The striking installation will be ready to open to the public on 13 September. With the highest step 7.7m above the ground, visitors will be at approximately the height of a three?storey building, providing an opportunity to experience both Tate Modern and the river from a unique setting. Endless Stair will offer an additional complementary interactive experience to an already vibrant cultural area.

The staircase will be closed at dusk each day. By night, the installation will be artistically bathed in light, evolving into an intriguing piece of art for passers?by to enjoy. The lighting scheme, designed by Seam Design, promotes various interactions within the structure by enhancing the juxtaposition and relationship between the surface/solid, solid/void and disorientation/configuration through the use of carefully placed and aimed luminaires provided by Lumenpulse. The lighting controls and sequencing will enhance particular features to express these contrasts creating an interactive play between the physical structure and the ephemeral nature of light.

The Endless Stair is the second hardwood structure that AHEC (American Hardwood Export Council) has commissioned for the London Design Festival in collaboration with Arup. While providing a unique public experience to celebrate imaginative design in London, these collaborations have an important technical design legacy and challenge current thinking within the construction industry. In autumn 2011, Timber Wave, designed by AL_A, was gracefully located outside the Victoria & Albert Museum, showcasing the design and engineering merits of American red oak. Now, building on recent developments within the wood industry and innovations with the use of CLT, Endless Stair introduces the structural potential of American tulipwood CLT. The research and development process will be recorded in a project publication which will inform and inspire architects and engineers for years to come.

“Tate is delighted tosupport the London Design Festival with a location for Endless Stair and we look forward to the installation, on Tate Modern’s north landscape,beinga major attraction of the Festival this September.”

Endless Stair will be open to the public from 13 September–10 October, located on the riverside of Tate Modern, Bankside, SE1 9TG 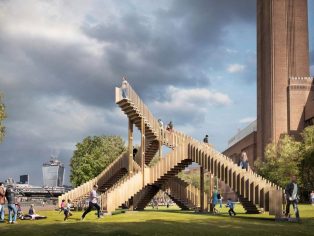