What the standards require
Clause 6.3 of BS5266 ‐1: 2011 requires that the risk of occupants being in total darkness, in the event of failure or after testing, of individual escape lighting luminaires should be minimised by ensuring that emergency illumination from at least two luminaires or emergency exit signs is visible in each open area requiring emergency lighting and escape routes.

For the purposes of compliance with this clause, the light emitted from exit signs is considered acceptable, however it is considered to be a beacon of light rather than any consideration that the exit signs will contribute to the required minimum level of illuminance.

Where legislation allows, exit signs need not necessarily be internally illuminated, but rather legend panels illuminated externally by the emergency lighting luminaires.

Rated Light Output from Exit Signs
An illuminated exit sign cannot be considered to contribute to the achievement of the required minimum level of illuminance specified in BS EN 1838:2013/BS 5266‐ 7: 2013, either in an open area or along an escape route, unless it has been photometrically tested and determined to have a rated light output and light distribution.

Most exit signs have not been so tested, as they are designed to be signs and to only illuminate the sign legend. Some exit signs have downlight panels, but these are to be considered only as providing courtesy light unless photometric testing has been carried out and the light output and its distribution determined. 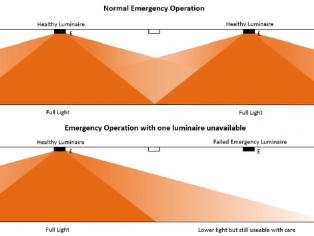