Design Engine’s renovation and extension of the Chapel at the University of Winchester has won a RIBA South Award 2017. A RIBA Regional Award is given to a UK building for its regional importance as a piece of architecture.

In 2015 the University commissioned Design Engine Architects to oversee a complete restoration of the internal and external fabric of its Victorian Chapel to be one of the most visible expressions of the celebrations to commemorate the institution’s 175th anniversary. Originally built in 1880, and then extended in 1927, the Chapel is used for a number of different events and purposes: services, group meetings, concerts and as a place of quiet contemplation.

In addition, the University asked for an extension to the chapel, to include a small side chapel and a social and meeting space. The brief was to create a very special project, to sit as a small ‘jewel’ in the heart of the campus.

The obvious location for the extension was to the north of the main Chapel; despite the site constraints, the resulting design is an empathetic response to the gothic revival building where its connection, form and materiality seem both intuitive and exciting. The form lent itself to a timber frame structure – a series of primary wall and roof trusses, each one different to create the changing form. Externally, the form is clad with perforated aluminium panels feature on Design Engine’s award winning chapel renovation and extension, anodized to give a highly reflective ‘gold’ finish, giving a dramatic textural surface to the building that is continuous over both roof and wall, allowing the building to be interpreted at different distances and scales. Design Engine developed a pattern referential to the existing architecture and an interpretation appropriate for the 21st century.

The interior of the original gothic revival chapel has been returned to its former glory with renovation work to the walls and timber ceiling alongside the introduction of new oak and stone floors, heating and architectural lighting. The University chose locally sourced Purbeck limestone, a material traditionally used for its decorative quality in churches and cathedrals across England, exploiting the natural characteristics of the embedded fossils within it.

The original tiled frieze and angels on the Eastern wall have been restored behind the reinstated chancel steps. A new contemporary altar has been introduced, made from seven horizontal sections of Purbeck stone. The seven sections make reference to number imagery within the Christian faith, as well as a celebration of the University’s anniversary; the stone sections also representing the seven 25 year time periods that make up the 175 years of the institution.

A new font has also been commissioned greeting visitors on entering from the South door. Designed to reflect light within the interior spaces, the font basin, made from highly polished stainless steel, is a section of a sphere, a reference to ‘light of the world’. The basin is supported on a polished Purbeck limestone cylindrical plinth.

A number of bespoke oak furniture pieces were commissioned from and designed in collaboration with Luke Hughes, most notably the oak pews, lectern, credenza storage units, bookcases and tables.

“We are delighted to have won a RIBA South Award. The project has been extremely rewarding for our team, an opportunity to restore a building that belongs to the foundation of the university, and an opportunity to craft something new as part of our own time and place. The University has been consistent in its contribution to the narrative behind the project and unbreakable in its support of the design team in delivering the intended final design.”

“I am delighted that the outstanding restoration and extension of the University’s Chapel by Design Engine Architects has been honoured with a RIBA award, marking its regional architectural importance. The University commissioned the project in 2015 in celebration of our 175th anniversary and in recognition of the central role that the Chapel plays in University life, spiritually, socially and culturally. We are very proud of the restored Chapel and now of its RIBA award.”

Richard Webster, Project Manager at the University of Winchester, said:

“The Chapel project has served to preserve and enhance one of the University’s most historic buildings, and extend it in such a way as to demonstrate our continuing commitment to bold innovation and architectural excellence. The finished building is, quite literally, a jewel within the campus; a place for prayer and quiet contemplation, but also a place where one can be both moved and inspired.” 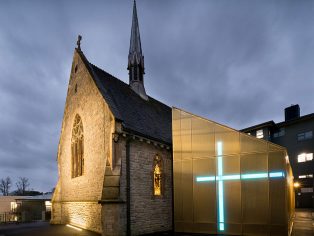