Down the garden path

On a choice site in fashionable Fitzrovia sits a mixed-use scheme offering high-end flats, office space including the UK home of Facebook, and public green space – in a design carefully bedded into its context. Sébastien Reed reports

A stone’s throw from Oxford Street and Tottenham Court Tube Station in the very centre of London stands what developer Great Portland Estates (GPE) calls its “largest and single most important development” to date. GPE’s new “destination” in the fashionable area of Fitzrovia, Rathbone Square provides 142 luxury and 22 affordable flats, together with 2,340 m2 of retail space, 22,560 m2 of office space, and a 1,800 m2 feature square and garden – one of the first in the centre to have been opened to the public for more than 100 years. The site formerly held a Royal Mail sorting office, and the scheme’s third basement level still houses a disused ‘Mail Rail’ station, previously used to distribute packages around the capital. The design by architects Make aimed for a sense of permanence, in response to the client’s ambitions of “a high-quality mixed use development, to stitch something into the area that would feel like it had been here for quite some time.” Project architect Graham Longman led a 23-strong team at the practice plus numerous design collaborations to create a highly context-sensitive new building, adding value to an already premium plot. With tenants including Facebook, the building has already proven to be a popular addition to London’s high-end commercial real estate scene.

Rathbone Square comprises two roughly L-shaped blocks of seven to nine storeys, interlocking to create an enclosed central square and garden. There are three entrances to the inner square, one at the east side, and two at the west side of the site. In terms of programme, the south block contains the bulk of the scheme’s office space, as well as a loading bay, goods lifts and an underground distribution centre, while apartments and residential amenities such as swimming pool, gym, wine cellar, private cinema, automated car park accommodating 79 cars and residents’ lounge are situated in its the north block. In total there are 80 different apartment types and retail units of varying sizes skirting the inner and outer peripheries of the complex at ground level, including spaces for retail and restaurants. When it came to design of the look and feel of the buildings’ interiors, the architects “tried to limit the use of applied colour,” says Longman. The architects used a “monochromatic colour palette,” specifying materials “with a sense of luxury, tactility and warmth.” On material choices, Longman says: “In the west-end and Fitzrovia, there’s a really eclectic mix of building types, you’ve got buildings from the Edwardian period, Georgian, Victorian, post war, interwar and modern buildings, but what holds it all together is the quality – such as specialist brickwork, terracotta and metals – and we have tried to express that richness here.” Danish-style clay-faced bricks, longer and thinner than the UK standard and in an off-white colour, are featured extensively on the building’s exterior. The horizontal joints are raked back while the vertical joints are flush to “emphasise horizontality” across the building, says the project architect. Garden-facing elevations reinforce this visual effect through the use of long ceramic tiles. Grey bricks are used at ground level as a backdrop to the street-facing elevations adjacent to Newman Street and Rathbone Place. On the northern block, balconies are clad and windows framed with terracotta ‘ribs’ arranged and decorated to emphasise vertical contours, contrasting with the horizontality of the brickwork beneath. The vertical lines of the balcony elements are extended by dark stainless steel balustrades crowned with perpendicular oak handrails. Windows on the southerly block (housing Facebook’s UK headquarters), are framed with chrome elements, and separated vertically with crinkly stainless steel panels. Longman says this provides a “sparkle and lift” to the office portion of the scheme, while “signalling its commercial function”. Longman explains the reasoning behind the distribution of the residential and commercial portions of the building to the north and south blocks respectively: “To the south you’ve got the business and commerciality of Oxford Street, then as you migrate to the north you start to get into Fitzrovia proper – it’s much more community-based. The streets become much smaller and more organic.” The upper levels of the development consists of stepped back volumes clad in bronze anodised panels of various hues. This stepping-back serves two main purposes; firstly, scaling the building down to better match that of the surrounding streets, while looping round from the south-west corner, upwards and back around to, secondly, tie the entire scheme into a single entity. The brick elevations also step down where the facade meets those of neighbouring buildings’, helping blend the scheme into the rest of the street. Model-making from formal concept right through to final design helped Make’s team ensure that the building conformed to the language and scale of its surroundings. “On the south-west side is where we really tried to erode the height of the building,” says Longman. The stepping-down of the building’s upper storeys allows afternoon sun to penetrate into the secluded inner garden, as well as yielding a set of open tiers accommodating private terraces and roof-garden spaces. Ceramic tiles replicating the appearance of the brickwork on the internal facades help reflect light into the inner garden. At both north-east and north-west entrances, bronze cladding runs down the building’s internal facade from top to bottom until it meets two rounded full arch passageways faced in jade green ceramic tiles – the building’s most striking visual elements. Longman explains this design works as “a device signalling that it’s a place that you can enter.”

“When we looked at historical maps from the 1800s, we noticed that there had never been a public route through the area,” explains Longman. The architects saw the scheme as having an important function of “a pressure valve for Oxford Street,” with Rathbone Square located between Fitzrovia ‘proper’ and Tottenham Court Road Station, soon to see the opening of an additional Crossrail station. It was paramount for Make that the finished project cater not only to the client’s requirements of adding value, but also created “an asset for the people who work in Fitzrovia, live in Fitzrovia and visit Fitzrovia.” So, Rathbone Square is itself a shortcut between Newman Street and Rathbone Place. Make worked in partnership with spatial and urban designers Space Syntax to implement a “unique modelling approach,” taking into account the socioeconomic dynamics of the area to deduce the best positions and proportions for the square’s entrances and exits. The south-west entrance to the square is the broadest of the three entrances at 7 metres wide and, unlike the other two, it is open to the sky. This is because it was likely to be the busiest route into the square – being in closest proximity to the Crossrail station and Oxford Street. The east entrance from Rathbone Place is slightly narrower, while the north-west entrance is the most tapered. These entrances at the northern corners of the square, are enclosed by the jade green ceramic passageways, referencing the passageways common across the wider Fitzrovia area. Green was chosen, according to Longman, “because it really picks up on the freshness and vitality of the garden.” They frame visitors’ first view of the gardens within, their colour helping establishing a visual connection with the greenery inside – drawing people into the space and offering a “sense of discovery”. At each entrance are a set of cast bronze gates designed and crafted by Robert Orchardson, and combined with the crackled finish of the ceramic glaze and segmented lighting and windows on the inside of the passageways which light the adjacent retail units, contribute to the “artisanal quality and level of detail” that characterise the project. Over time, the bronze gates will patinate to complement the green of the ceramic passages.

Longman attributes Make’s successfully winning the project in a competitive tender to the inclusion of the garden above all. He asserts: “It gives something back to London,” adding: “In some respects, the buildings are a backdrop to the garden. It’s a bit like a piece of treasure because, as the building wraps around it, it kind of protects it.” Table-shaped water features adjacent to the south-west and east entrances produce a visual and aural wellness-enhancing trickle, and frame reflections of the sky and surrounding building. The garden was designed in collaboration with landscape architects Gustafson Porter + Bowman who, Longman says, “understood the concept from day one”. Its design was inspired by bold shapes and simple geometry, exemplified in the quarter circular central lawn and planting – best experienced from the balconies above. The lawn gradually rises towards a long, curved bespoke-crafted wooden bench which separates the grass from the planting behind it. As well as sitting and meeting friends at lunchtime, Longman says the spot is good for “people-watching,” with passers-by moving from north to south and south to north through the garden. Resembling the nearby water features, dark brown cuboid granite planters of varying lengths are arranged around the western side of the garden, housing trees and other flora, and doubling up as benches. Cherry and magnolia trees were carefully selected and positioned so views across the garden of retail shop fronts could be maintained. On the east side of the garden, a paved terrace strip has been designed to accommodate outdoor seating for the adjacent bistro unit. A band of perpendicular ground-level rooflights, well-concealed by plants, allows light to penetrate into the development’s first basement level which contains an event space leased by Facebook, among other functions. A fish-shaped drinking fountain sculpted by artist Alison Wilding allows city-dwellers to fill their water bottles, bolstering the hand-crafted feel of the overall scheme as well as subtly working against plastic consumption.

Thanks in part to roof-mounted photovoltaics, a CHP (combined heat and power) system and heat exchangers located in the basement plant rooms, Rathbone Square achieves BREEAM Excellent rating. Care was also taken to balance the facade’s composition of 60 per cent solid and 40 per cent glass. This aids “the control of thermal gain and heat loss,” curbing the need for air conditioning, and “the need to regulate the amount of light coming into the building”. Public realm specialist Publica aided Make in deciphering the layout and configuration of shops and their windows by taking note from other London retailers. This precipitated “more solidity to the shopfronts,” providing extra space for utilities like shelving and storage. Embracing the outdoors, each apartment has its own balcony (some have two) as the focal point of their design. Interiors are designed to borrow from the exterior colour scheme using white paint and dark timber veneer illuminated by mixed lighting solutions. Plus, arched taps in the kitchens and bathrooms connect the interiors with the scheme’s garden passages. Helen Hare of GPE commented on the successful approach taken by the architects to delivering a robust, meticulously crafted result: “Architects set the scene and drive the scheme and take the vision to reality. I think that’s certainly what Make has done at Rathbone Square.” In February 2018, GPE sold the development for £435m, generating around £110m for their shareholders – testament to Make’s contribution. Plus, the project also finished on schedule, despite the challenges of building in an inner-city location. Beyond these important achievements, what makes Rathbone Square especially notable in the commercial sector is its generosity. Despite housing high-flying occupants and top-grossing multinational corporations, it gives something precious back to the wider public and community. It offers passageways to a tranquil refuge away from the clamour of one of the world’s busiest capital cities for both occupants and the public. 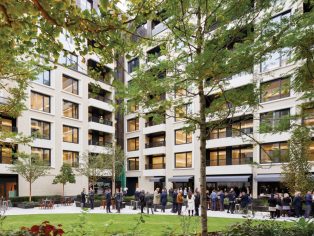 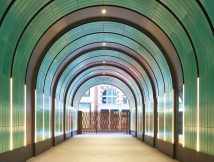 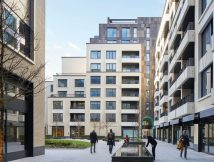 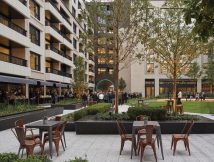 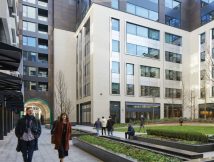 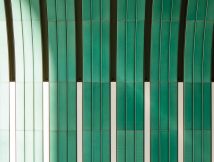 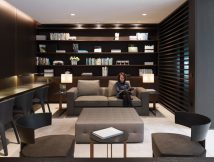 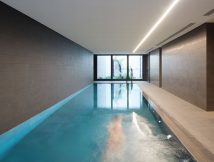 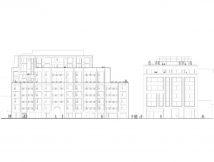